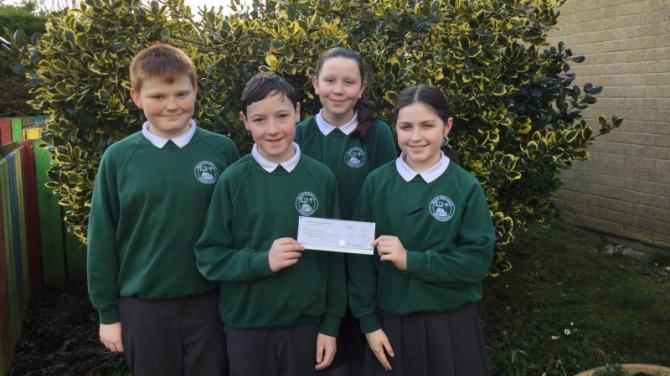 A PRIMARY school in Donemana is celebrating after receiving a funding windfall from the Irish American Partnership.

St Michael's Primary School - which opened its doors last September following the amalgamation of the primary schools of Loughash, Altishane, St Joseph's, Glenmornan and St Patrick's, Donemana - has received a cheque for $1,000 from the partnership.

The grant, through The Irish American’s Partnership’s School Library and Science Programme, aims to assist schools, by donating funds for books in school libraries and to enhance science materials available for young students.

Mrs Jacqueline Carlin, principal at St Michael's PS, has allocated ten per cent of the grant to pupils who will now decide how best to use their ten per cent through discussions at class and school council level.

A school spokesperson explained: "The relationship between the Irish American Partnership and St Michael’s PS, was first formed two years ago, during the 2017-18 school year.

"Mary Sugrue, CEO of the partnership, contacted St Patrick’s Primary School to inform Mrs Carlin that the school had been a benefactor of Irish ancestry, who lived in America.

"In that initial contact, Mary explained that the partnership encourages Irish Americans to go back to their roots, to the place from which they or their ancestors came and give something back to the young people who live there today.

"Since then, St Patrick’s PS and now St Michael’s PS have been benefiting from the partnership. Both staff and pupils were thrilled with the news."