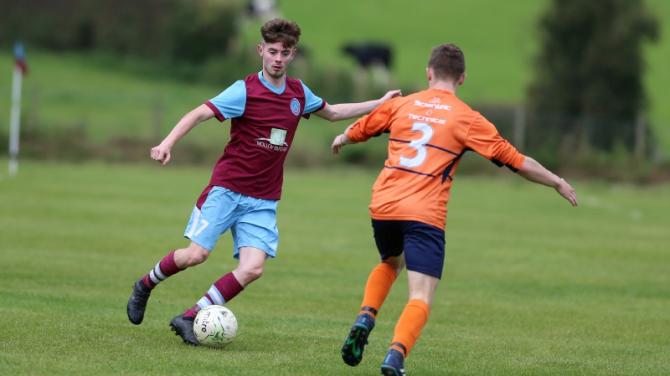 CIARAN Beacom and Gerry McCullagh fired Tummery Athletic into the second round of the Junior Cup as they sealed a 3-1 victory over Windmill Stars Reserves at Crawfords Lane on Saturday.

It took the hosts longer than it probably should to open the scoring, but after Malachy McLaughlin was denied, Cathal Beacom went close on a number of occasions and brother Ciaran did likewise.

The breakthrough finally arrived when, six minutes before the interval, Paul McHugh and Ciaran Beacom combined for the latter to score.  After the break Aidy McCaffrey tested the ‘keeper from a good ball in by McLaughlin and Tummery followed up with a couple of chances from McHugh, but they both finished high and wide.

On 55 minutes the hosts claimed the goal of the game, as McHugh found McLaughlin and the playmaker sent a precision pass in to the box for McCullagh to head home. McCaffrey and McLaughlin continued to keep the travelling defence on their toes with a brace of efforts, while Cathal Beacom drew a couple of saves.  Attacking runs from Ciaran Beacom and McLaughlin were proving effective for the Dromore men as they kept pressing.

Midway through the half Stars went close, as Jay Kelly played a corner short to Conor Owens, but he sent his shot low past the post. In the last minute of normal time, the visitors made their move as Keenan ran through unopposed to guide a low shot just inside the post.

With the game now in time added on, there was plenty yet to come. Athletic were awarded a penalty as Barry Quinn was deemed to have fouled McCaffrey in the box.  Cathal Beacom stepped up, but after the initial two goes at it called for retakes, Hearty parried at the third time of asking.

The resulting corner from McLaughlin was met by a bicycle kick, on the turn, from Cathal Beacom and the marksman delighted in finally getting the better of the netminder.