Pub damaged by devastating fire set to reopen this Friday 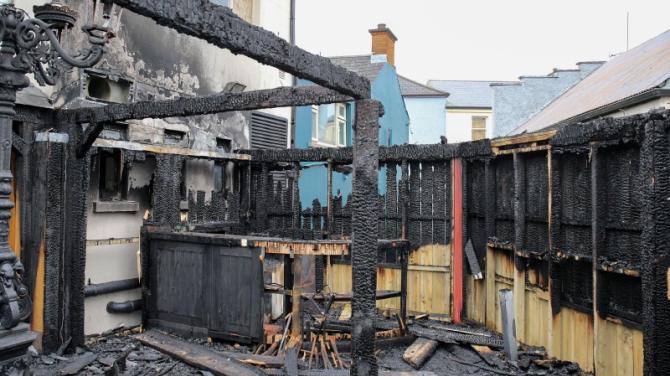 The owner of an Omagh pub is in a race against time to reopen his premises, following a devastating fire that partially destroyed the facility earlier this week.

The blaze at The Blind Cobbler at John Street gutted the smoking area at the rear of the building and caused scorch damage to the interior and major smoke damage throughout the business.

Owner, Andrew Shortt, who only purchased the premises two years ago, said the first he heard of the fire was when he received a call at 3.30am on Monday morning.

"I got quite a shock. The news was devastating because we had put to much hard work into this project. We were ready to launch our new menu and we will still launch it when we reopen, but we didn't really need this at the minute," he said.

Fire crews from Omagh, Fintona, Newtownstewart and Dromore were tasked to the scene shortly after 3.30am.

“Firefighters were called to a fire at an end terraced three-storey non-residential building. Firefighters wearing breathing apparatus extinguished the fire. The cause of the fire was determined as accidental. The incident was dealt with at 5.35am,”  a Northern Ireland Fire and Rescue Service spokesperson said.

The news of the fire became public when a post appeared on the pub's Facebook page at 7.12am on Monday morning. It revealed that the business would be closed until further notice, but added that they hoped to reopen “very soon”.

“Due to a small fire last night we are sad to say that The Blind Cobbler is closed until further notice. But don’t worry we hope to be back open very soon!! We will keep you posted so stay tuned,” the post said.

Mr Shortt added that there was extensive damage done to the rear of the property and much smoke damage inside.

"It's so heartbreaking when you think of all the hard work the team has put into the pub."

He added he said he had no other option but to take the positives from the incident.

"It's an opportunity to make the bar bigger and better, that's now the only way I can look at it. Thankfully there was no one in the building".