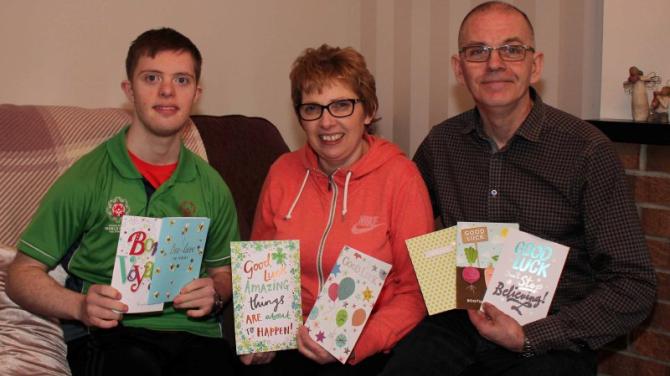 Twenty-one-year-old Omagh Spires Special Olympics Club member, Lee Mitchell, will become the first athlete from the town to take part in the Special Olympics World Summer Games, which will be officially opened tomorrow (Thursday)  in the exotic surroundings in Abu Dhabi over in the United Arab Emirates.

He will be representing Team Ireland in the equestrian event and promises he will be doing his best to bring back a medal. He will be accompanied by his mother, Laura, father, David, brother, Sam, sister Amy and her boyfriend, Lee, and friends George Goodwin and India Scott, who will be acting as volunteers at the event.

The Special Olympics World Games 2019 will see more than 7,500 athletes from over 190 nations compete in nine venues across Dubai and Abu Dhabi until Thursday next, March 21, in what will be the largest sports and humanitarian event of the year.

Lee, who is a STEPS student at South West College, is one of the 91 Irish athletes currently at the games. They will compete in 12 sports – athletics, badminton, basketball, bocce, bowling, equestrian, football, golf, gymnastics, kayaking, swimming and table tennis. The team is supported by a volunteer management team of 39 and more than 70 volunteers will also be on hand to support the athletes.

To represent Team Ireland and compete on the world stage in Abu Dhabi is a big honour and one this athlete is not taking lightly. Lee's journey to the Special Olympics has taken place over a number of years. He had to prove himself at local, regional and national stages in competitions in Limerick and Dublin, before qualifying for the big one and has two all-Ireland gold medals for his efforts.