'Speed king' Robbie slows down for his latest conquering challenge 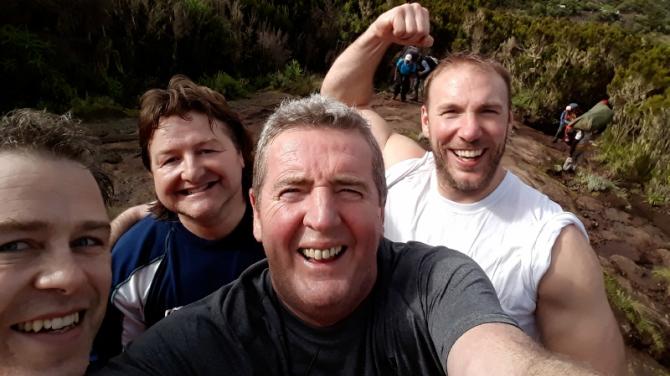 Over the years Omagh man, Robbie McGurk, has tackled many a challenging rally stage at the wheel. The motorsport enthusiast was well-known for giving it his all over the years – and making rally cars do remarkable things!

There were many exciting outings with thrills, spills and lots of success along the way. Many watched in amazement as the affable speed king of the forest stages managed to keep the car on the road – most of the time! - in the annual Omagh Motor Club Bushwhacker Rally – just one example.

But recently Robbie reached new heights when he faced a totally different challenge on a charity trip he will never forget, where perseverance rather than speed was the winner. That was seven days on Mount Kilimanjaro in east Africa - climbing a high of 5,895 metres in temperatures of minus 20 degrees Celsius - with a group of former rugby players, including Stephen Ferris.

And to top it all Robbie raised a total of £7,500 for a great cause. Although he admits it is one of the most difficult challenges he will ever endure, Robbie, at the age of 61, is proud he was able to successfully conquer the mega-trek.

"At the time, when you're there, you just think: 'What have I got myself into? Why did I volunteer for this?’. When you get back down to earth, you gather your thoughts and you feel it was a great achievement and fantastic to do with such a great bunch of people," said Robbie, who showed that age was no barrier, as he easily kept up with former rugby professionals, Shane Byrne, Marcus Horan and Mike McCarthy.

"Stephen Ferris will tell you it is one of the most difficult things he has ever done in his life. Every one of them to a man will tell you the same thing. Even though they have all retired, they have been training since they were in primary school. They are all super-fit, but they all struggled."