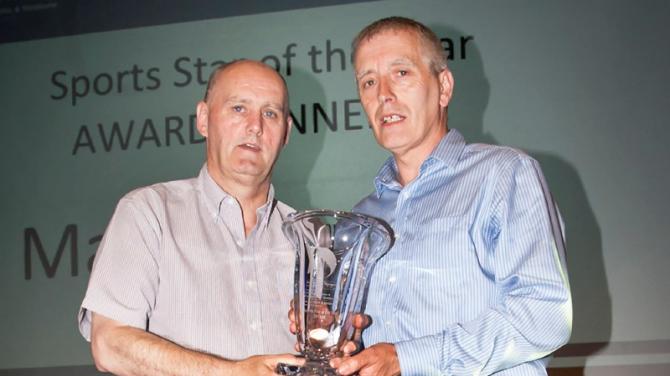 Mark's stunning success in Poland in the over-55s category of the World Masters Athletics Championships back in March was deservedly recognised with the overall prestigious prize at the Fir Trees Hotel, Strabane.

In the team sections at the annual awards night, Castlederg High School U14 Girls Hockey Team received the School of the Year award.

It was the Aghyaran man - who is a member of Finn Valley AC - who proved the difference in the end as Ireland claimed the top step on the podium and the coveted gold medals.

To be recognised with such an esteemed award was just award for Mark who had been training seven days a week, every week, in preparation for the event.

"It is massive for me - it was a huge shock. It has taken a while to sink in! It is a nice honour for the sport, more than anything else," said Mark.

"It's a great privilege. It was nice to even be nominated for the award and anything after that was a bonus.

“When you're out slogging the roads and training hard you're not thinking about awards. You train to get to the level you want to get to - awards don't come into it.

“We knew we had a strong team in Poland, but we didn't realise it was strong enough to win outright. We knew if we performed on the day then we would have a realistic chance of winning a medal.

“Only 14 seconds separated the top three teams over the five-mile circuit, so it was very close. We knew we were in a battle, but we held on for our lives.

“It was a special feeling to be crowned the best in the world. It definitely took a while to sink in! It made the training worthwhile, because I was training seven days a week.

“It’s all about eating right, stretching, doing the gym work - it all adds up.”

Forty-two years a member of Finn Valley, where he also coaches fellow members, Mark has dedicated a lifetime to athletics, but he has no intention of retiring any time soon.

“Athletics is my passion. I plan on going to Edmonton, Canada, in two years’ time to try to do it all again in the over 60s World Masters.

“I have to get my place in the team first, of course, so I’ll be training towards that.

“But in the short-term, I’ll be aiming for Southport for the British and Irish Masters Cross-Country International in November.

“There is no chat about retiring just yet! When the body is able, definitely not!”

Mark wanted to thank his club mates and everyone who has worked with him over the years.