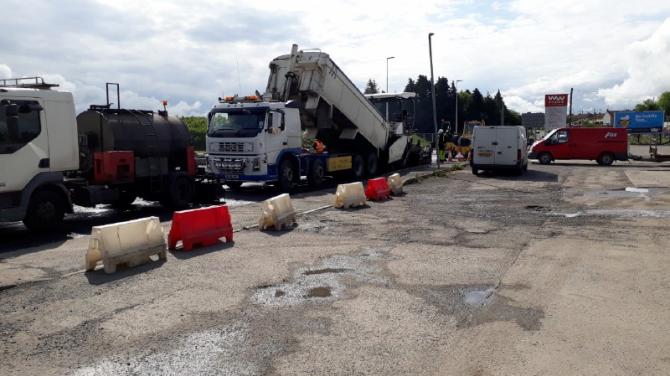 BUSINESSMEN affected by traffic chaos and blockages in and around the construction of the Strathroy Link Road and on new and old roads leading to the old Derry Road roundabout in Omagh are set to initiate legal action against the Department for Infrastructure (DfI).

They claim they have lost "tens of thousands" of pounds in lost business because of the work there.

The new road scheme is located on the approach to Omagh from Strabane - to the north-east of the town. The contract for its construction was awarded to local firm, Fox Contracts of Carrickmore in June 2017 and the construction phase was programmed across a 66-week period that was initially due to be completed in September 2018.

It was put back a year and at the time a spokesperson for the DfI said it was anticipated that the new road, which will cost in the region of £7.5 million, would be complete in July 2019. This deadline is fast approaching but for the local businessmen, it has brought chaos at their locations and financial impacts.

Gerard Keyes of the 'Toolbox' company and Michael McAleer from the AMCO Spar, have premises on the Derry Road in the direct line of the work.

'Toolbox' has become a 'go-to' place for DIY enthusiasts and professional tradesmen in Omagh and the surrounding region but now Mr Keyes fears for the future.