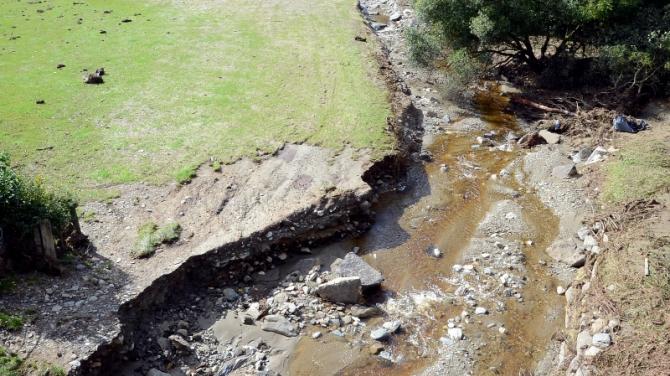 EXACTLY two years since the Glenelly Valley was devastated by floods and landslides caused by freak rainfall, farmers have been working tirelessly to get their damaged lands back to normal - despite little to no help from government agencies.

In August 2017, at least 50mm of rain fell during a three-hour storm, causing 13 landslides and untold damage to farmland in the Glenelly Valley.

While some farmers lost livestock and miles of fencing, others were faced with fields that were submerged in a deluge of silt and rubble that took months, and several thousands of pounds, to clear.

However, two years on, the scene is different. The efforts of local farmers have seen hundreds of tonnes of silt and debris cleared, and thanks to favourable weather this year and last, damaged agricultural land is once again becoming productive.

However, while normality is gradually being restored, many farmers are still disappointed that vital financial assistance following the once-in-3000 year event never materialised.

This was despite the fact the Department of Agriculture, Environment and Rural Affairs committed £500,000 to the Lough’s Agency to carry out remedial works on four river catchments affected by the flooding. While work on the affected riverbanks is planned, farmers say it hasn’t gone far enough.

But the fight for compensation continues - next month, local MLA Daniel McCrossan, and the farmers who suffered the worst excesses of the disaster, will meet DEARA representatives to highlight their concerns and demand action.

Plumbridge farmer, William McKelvey, had over 20 acres of farmland damaged during the landslides. His land has since been cleared, but like many of the affected farmers, his campaign of repair was self led. Nowadays, the mounds of silt piled high in the corner of his fields serve as a grim reminder of the events of August 2017.