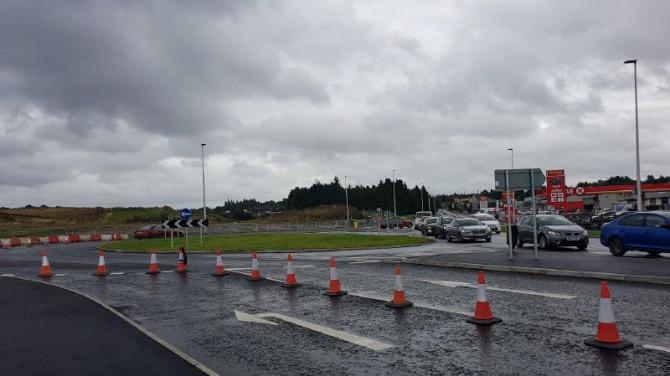 DISRUPTIONS to their businesses caused by major roadworks on the outskirts of Omagh have forced two local employers to step up a campaign for compensation.

While the Department for Infrastructure (DfI) confirmed this week that the new £7.5 million Strathroy Link Road is scheduled to be finished by October, the owners of the firms most affected by the ongoing work - 'Toolbox' and 'AMCO Spar' - have claimed that weeks of intensive work between the new road and the Derry Road roundabout had cost them dearly.

They argued not only did they lose trade because customers found it hard to get to their sites, many simply didn't want to come in due to the safety and congestion concerns.

They also argued that the design of the road lacked a simple yellow box which could have regulated traffic much better than the 'keep clear' signs currently in use.

Gerard Keyes from 'Toolbox' and Mark McAleer from 'AMCO Spar' brought their concerns to Fermanagh and Omagh District Council, the PSNI and a number of organisations indirectly affected, they claim the DfI were unmoved and as a result both companies had lost "tens of thousands" of pounds in lost business as a result.

The new road scheme is located on the approach to Omagh from Strabane - to the north-east of the town. The contract for its construction was awarded to local firm, Fox Contracts of Carrickmore in June 2017 and the construction phase was programmed across a 66-week period that was initially due to be completed in September 2018.

It was put back a year and at the time a spokesperson for the DfI said it was anticipated that the new road would be complete in July 2019.