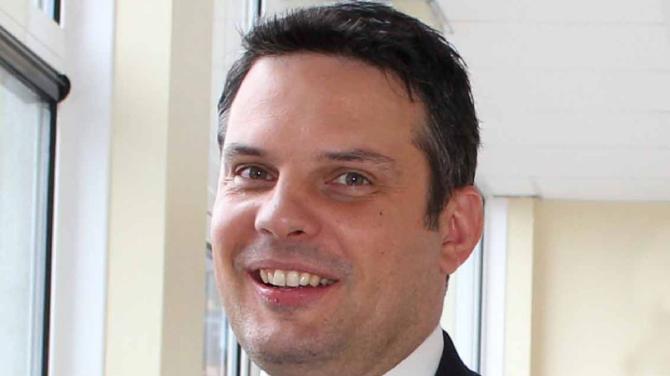 The new principal of Omagh High School has said he is excited to get to work in what he described as a “caring and friendly” school.

At the start of this week, Mr Christos Gaitatzis led his first assembly at the school, where he spoke to pupils about using all five of their senses to be the best they can be.

And it is this emphasis on ‘being the best’ that Mr Gaitatzis aims to bring to Omagh High School – so much so that he hopes it can become one of Northern Ireland’s top non-selective secondary schools in years to come.

Originally from a rural area in Thessaloniki, Greece, Mr Gaitatzis has come to Omagh with a wealth of experience. Having lived in England for some 20 years, he has taught in four large state secondary schools and one Independent Grammar school, where he rose through the ranks from a science teacher to head of science, and eventually vice-principal.

Having now relocated to Tyrone with his wife, Martina, and their eight-year-old daughter, Eliza, Mr Gaitatzis views Omagh High School as his latest challenge.

"Our young people in Omagh High School will be lifelong learners and valued citizens that will provide our town and wider area with future leaders.

“I will have to do a lot of work to fill in the shoes of Mrs Elkin. Having been at the school for almost 40 years, she fostered a tremendous quality of care and leadership. I am glad that I am entering a school with a very caring ethos and a high standard of education.”