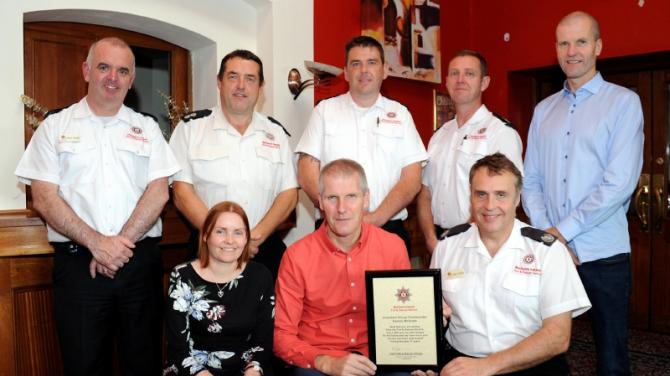 Newly-retired district commander Eamon McGrath admits that he didn't have much going for him when he left school - but joining the Northern Ireland Fire and Rescue Service set him on the path to a distinguished and high-powered career.

Last week, Mr McGrath retired from the NIFRS service after more than 30 years’ service. As district commander he was responsible for six local fire stations and over 100 fire fighters, and teams of station commanders, fire safety commanders and technicians

Having joined the Fire Service as a fire fighter in 1988, he gradually rose through the ranks to become district commander, based in state-of-the-art fire station in Omagh.

Throughout the course of his prolific career, among day-to-day fires and road traffic incidents,  he served during the unrest of the Drumcree protests in the 1990s and was involved in the aftermath of the tragic fire at Lammy Crescent in Omagh in 2007, in which a family of seven perished.

While an often harrowing and demanding profession, Mr McGrath said his career with the NIFRS has been ‘incredibly rewarding’, and he cites being able to serve and protect people in the local area as being a particular highlight.