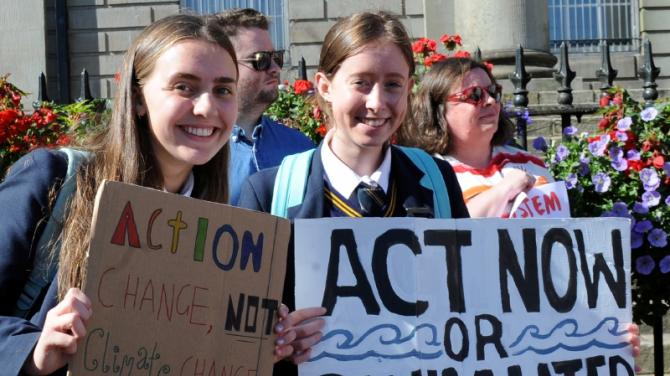 “System change not climate change” was the message of a recent protest on climate change and environmental destruction in the centre of Omagh.

The protest was part of the global Earth Strike movement, which saw major protests take place in towns and cities around the world on September 20.

In Omagh, the protest gained momentum from a number of key groups, including Omagh Trades Union Council, the anti-mining group CAMIO and Save Our Sperrins, and was also supported numerous local people including pupils from Omagh Academy, Omagh Christian Brothers’ and Loreto Convent Grammar.

Local environmental issues were at the fore of the protest – potential gold mining in the Sperrins was forcefully denounced by the likes of Independent councillor Emmett McAleer, while outgoing chairperson of Save Our Sperrins, Cormac McAleer, denounced the threat of bogland removal in the area.

Emotions ran high, with impromptu speakers voicing their climate change concerns, and even broke into song, with an unplanned rendition of Louis Armstrong’s ‘What A Wonderful World’.