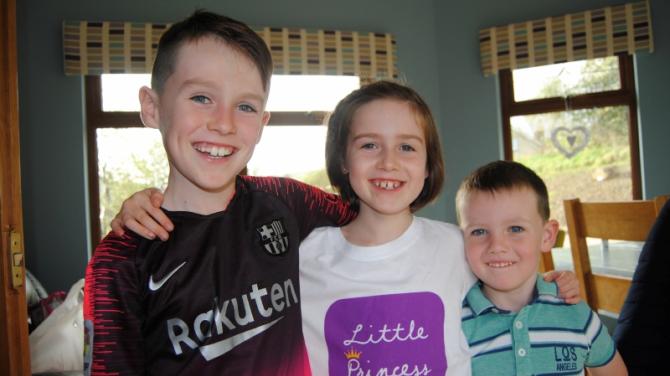 A thoughtful seven-year-old from Ballygawley had her long locks cut up to her shoulders so that her hair can be used to create wigs for other children who are suffering from cancer.

Primary three pupil Kayla Magill, who attends St Malachy's Primary School, Glencull, is now sporting a stylish chin-length bob, and has generously donated the many inches of her ash brown hair to the Little Princess Trust.

The charity provides wigs free-of-charge to children and young people up the age of 24, who have lost their own hair due to cancer treatment and other conditions.

In the process, Kayla and her family also raised a fantastic £1,000 for the charity by hosting a successful tea party which was very well supported by loved ones and friends.

"Kayla is a very naturally caring little girl, so she was very eager to help this wonderful charity," said her father Kieran.

"We organised a Tea Party in September for her family and friends to come along for some moral support for the cutting of the hair.

"The donations Kayla received was unbelievable and we are all very thankful to everyone who contributed financially or otherwise.

"We were amazed by the number of people who turned up to show their support and donate money to this wonderful cause.

"We gathered over £800 at the event itself and with added support from friends and neighbours the total continued to rise over the following few days and finished at a whopping £1,000."

Kieran added: "We, as a family are very proud of our little princess Kayla for being so brave and for helping those less fortunate than herself.  If anyone would like to donate to the charity, details can be found on www.littleprincesses.org.uk."