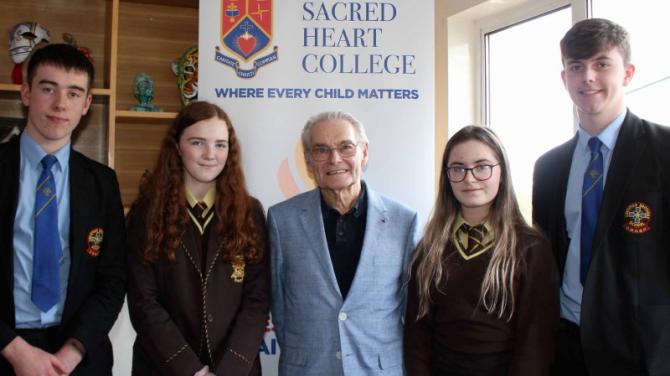 For over half a century Tomi Reichental remained silent; a Holocaust survivor - one of the few left on earth - his harrowing experiences were too painful to speak of.

He was only an innocent nine-year-old boy when he was deported from his family's farm in a tranquil and peaceful Slovakian village to the hell-hole of the Bergen-Belsen death camp, where thousands of starving people dropped dead in front of his very eyes.

But now Tomi has found his voice. In fact, for the last 15 years he has been travelling all around the world, telling the traumatising story of how he was dragged from his rural home which he called 'paradise' to the pits of despair, death seemingly inevitable.

And on Thursday past, it was the pupils of Sacred Heart College, Omagh Academy, Omagh High School, Christian Brothers Grammar School, Castlederg High School, Dean Maguirc College, Loreto Grammar School and St Joseph's Donaghmore, who had the unique experience of listening to his fascinating but hugely distressing story.

In a softly-spoken voice, Tomi, now 84-years-old, pleaded to hundreds of schoolchildren not to allow anything like the Holocaust to ever happen again; not to ignore bullying, or racism or sectarianism. To stand up and do the right thing - report hatred to their teacher or to the authorities.

Hate starts with whispers and words get louder when good people do not stand up and speak out, he said. When they do act, it is probably too late.

It scares Tomi that hardcore politics is seemingly growing in parts of Europe and the US; it angers him that hopeless refugees who have been through hell already have with nowhere to go.

And in Northern Ireland, with the political impasse now stretching well over 1,000 days, he stressed the need for compromise.

Tomi, who has lived in Dublin for over 50 years, explained how his family's fairly normal and peaceful life was turned upside down when propaganda about Jewish people sprayed like wildfire back in the 1930s. He was kicked out of school. He was beaten and received verbal abuse, and cried uncontrollably as his family lost basic rights to live in the place they knew as home.

Tomi explained how he fled his home only to be captured by the Nazis in November 1944 along with his mother, brother, grandmother, aunt, and cousin - his father left behind.

Crammed into a cattle car, they spent one entire week living in unbearable conditions with neither privacy nor hygiene.

When the doors finally opened seven days later, they were greeted by barking dogs and bullying shouts from armed SS men.

Tomi and his family had arrived at the notorious Bergen-Belsen concentration camp where he was to stay until the liberation of the camp in April 1945.

It wasn't an extermination camp but people were still dying through starvation and disease. Over 70,000 perished there, mostly Jews.

As children, Tomi continued to play and he remembers playing hide and seek but in the most disturbing environment - behind a pile of dead bodies.

Thousands of people were dying every day. The crematorium couldn't cope. People were walking around like skeletons - they were consuming just 600 calories per day.

Tomi got used to the stench of corpses. As a child, he didn't understand exactly what was going on. But he remembers the fateful day his grandmother cruelly perished; in total he lost over 30 members of his family in the Holocaust.

April 15, 1945, will be forever etched on his mind - the momentous day the British Army came to their rescue and somehow, Tomi was set free.

And though he refused to speak of his harrowing experiences, Tomi wasted little time in obtaining an education and eventually learned to lead a normal life.

But there in the back of his mind, the thought of Bergen-Belsen.

For 55 years he remained silent. Thankfully he found the bravery to tell his story.