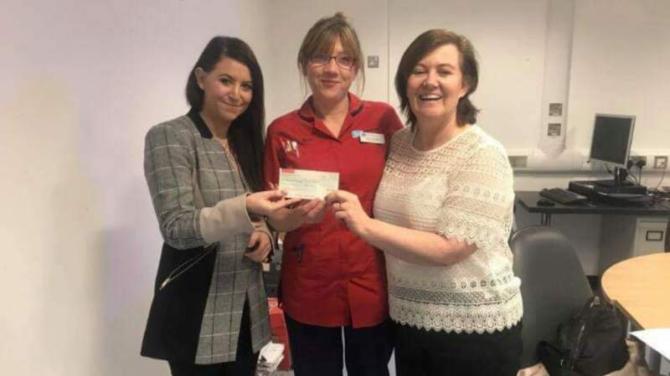 With new figures this week revealing that 59 per cent of stroke survivors in Northern Ireland feel that they did not receive enough support with their recovery, an Omagh stroke survivor has hit out at the ‘shockingly poor’ levels of aftercare that she experienced first-hand.

On World Stroke Day, the Stroke Association published new findings that show thousands of stroke survivors in Northern Ireland said they struggle to access the support they need to rebuild their lives after stroke.

There are currently more than 38,000 stroke survivors in Northern Ireland, and many, such as 57-year-old Jackie Convey from Omagh, feel let down by the health and social care system.

Jackie was first diagnosed with a brain aneurism but during subsequent surgery, Jackie had a stroke, aged 53.

Following a two-month stint in a hospital in Belfast, where she received physiotherapy, speech and language and occupational therapy, she was shocked at the poor level of care she received once she was discharged from hospital and returned to her home.

“On leaving hospital I was assured I’d be receiving all sorts of therapy from the Community Stroke Care team,” she said. “I was even told that they’d provide transport from my house to the clinics.

“I was shocked that when I got home, nobody contacted me at all for weeks. Eventually someone did phone to check how I was getting on with my therapy and when I said I wasn’t receiving any, they advised me to go to my GP who had to make another referral.

“I then did get physiotherapy and occupational therapy but I felt it wasn’t hands-on enough for what I needed. I still have problems with my left shoulder and arm and I do wonder if I’d had more physiotherapy, would it have improved my recovery.

“In the hospital they did warn me about fatigue but I don’t think what they tell you goes far enough. I just simply wasn’t prepared for what followed. It was awful. There were times after I got home when I thought I was suffering from depression or something like that but I now think that it was all part of the fatigue. I’d meet people out in public and just burst in to tears. I eventually went to my GP and started a course of anti-depressants which did help at that point but I didn’t receive any emotional support at all and I do think that would have helped me.”

It is estimated that one in four (28 per cent) of stroke survivors are not receiving enough emotional support, leaving them struggling to cope.

In the midst of her traumatic post-stroke ordeal, Jackie admits that she relied heavily on family members. She credits her recovery to supportive family members, especially her daughter, Sarah.

“If it wasn’t for my family, especially Sarah, I really don’t know where I’d be today. My daughter was the one who worked with me to stay focused on my recovery. When I would say I can’t do it, she was the one who said yes you can.

“I’ll always remember the day we were driving somewhere and my daughter Sarah stopped the car, got out and said, “right mum, get in there and drive.” That’s what got me back to driving and that was a huge step in rebuilding my life again.

“In the early days, just after I left hospital, it felt like I was just sitting on the sofa doing nothing, waiting for death to come. Back then I felt like I’d stepped out of my life. I’m so thankful that now I feel that I’ve got my life back again. As well as going back working three days per week, I’m now volunteering on my days off as well.

“I know that I’ve made a good recovery but stroke survivors shouldn’t have to worry about how to get their own therapy and rehabilitation. The system needs to work more for the patient especially in those early days after a stroke to give you the best chance of rebuilding your life”.

Barry Macaulay, Director of the Stroke Association Northern Ireland said: “Stroke turns lives upside down, robbing you of your mobility, your speech and often your independence. We know there are hospitals, stroke units and dedicated stroke professionals throughout Northern Ireland providing excellent stroke rehabilitation.

“But there are still thousands of stroke survivors across Northern Ireland being let down by the health and social care system when they leave hospital. This is putting people’s recoveries at risk. Surviving a stroke is the first challenge; recovery is tough, but it’s only possible when stroke survivors can access the range of support services that they need, and deserve, to rebuild their lives.”

“We’re here for everyone affected by stroke. We offer vital support and information through our Stroke Helpline. We also have a number of stroke clubs and groups that you can join to meet other stroke survivors, so you don’t feel alone in your recovery.”

The Stroke Helpline (0303 3033 100) offers information and support to people who have been affected by stroke.