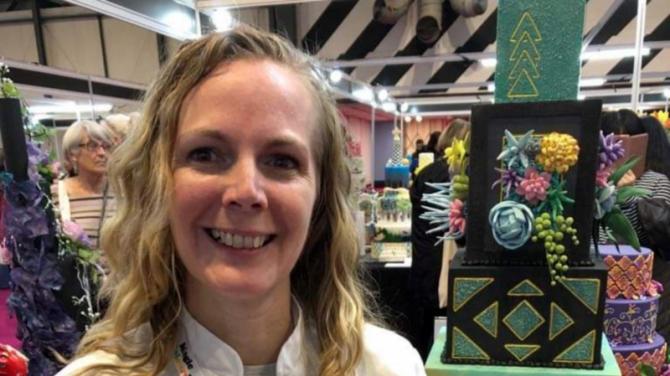 A talented Omagh cake artist’s delectable designs last week earned gold and silver at a prestigious show – and a bronze award for her baking-mad eight-year old son was the ‘icing on the cake’!

Emma Stewart, who has been crafting scrumptious cakes for almost a decade, impressed judges with her wonderful wedding cakes at ‘Cake International’, which takes place yearly in Birmingham.

And it seems cake-crafting runs in the family. Emma’s eight-year-old son, Ben, was awarded bronze for a delightful ‘tiered cake’ at the event.

Brimming with potential, Ben has now been asked to participate in a collaborative cake with other up and coming bakers at next year’s event.

Speaking on their recent success, Emma said: “Cake International is the world’s biggest cake show, and it is notoriously hard to achieve awards at it. It is judged by top professionals, and especially in the wedding cake category, they are looking for pure perfection.

“This is the fifth year I have attended Cake International, and my third year entering. This year I took two entries and achieved Gold and Silver awards, which I am more than happy with.

“I’ve previously won silver in 2018 and bronze in 2016, as well as running my own international showpiece exhibit in 2017. All of my awards have been in the wedding cake categories, which a notoriously hard and competitive to achieve in. Over that weekend I was honoured to be asked to demonstrate on main stage twice too.

In addition to success at Cake International, last weekend also saw the Cake Masters Awards, where Emma was  honoured to be a finalist in the ‘Rising Star’ category,  up against three extremely talented Cake artists from across the world.

“I didn’t win at the Cake Masters this, but to be nominated and make the final of such a highly prestigious awards is phenomenal. The competition is is the equivalent of the Oscars of the Cake world, and sees people from around the world including New Zealand Portugal, and America. This is a huge step forward for me.” Emma said.

“Overall, my recent success has been a continual progression for me in terms of honing my skills, I have been continually developing and that's the aim – to always strive toward perfection.

“I am particularly proud to have my youngest son, Ben, following in my footsteps. It definitely runs in the family! Ben is very interested in cakes, and wants to start his own business. He is in the process of starting his own Instagram page to post his creations, and he is already talking about entries for Cake International next year.

“As well as this, he’s been invited to join a collaboration for Cake International, which is being led by another young lad called Tristan. The theme is ‘They Think It’s All Cake - It Is Now’, and it’s a sports cake collaboration. It is encouraging that he has only done one competition and he is already getting noticed.”