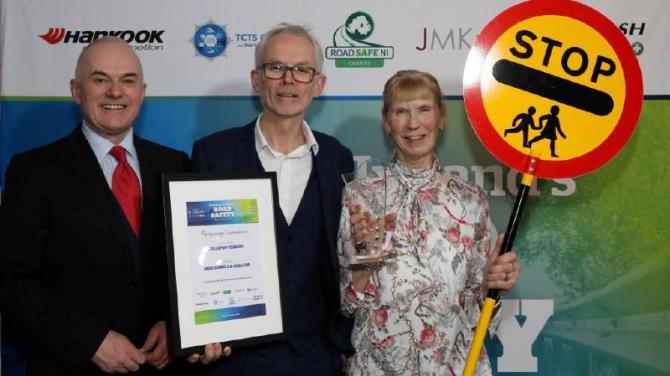 Not only is 'lollipop lady' Isabella (Daisy) Collum celebrating 40 years at Fivemiletown Primary School, she has also marked the brilliant milestone by scooping the 'Lollipop Lady of the Year' award.

Isabella's conscientiousness and industriousness won her the Specsavers sponsored award having been nominated by her school.

She started work as the ‘Lollipop Lady’ on September 3, 1979, on a very busy road in Fivemiletown positioned adjacent to a roundabout and close to a busy factory.

“Isabella is seen as a regular at any school event, performance, service or fundraising activity,” explained principal Melanie Houston.

“She is as much a member of staff as any teacher, classroom assistant, caretaker or kitchen staff member and enjoys the staff ‘get-togethers’ and outings. She even speaks to the Foundation pupils as part of their ‘World Around Us’ topic of ‘People who help us’ to highlight the importance of Road Safety.”

Speaking to the Tyrone Constitution, a clearly delighted Isabella said the years had flown by.

"When I first started, I was the youngest lollipop lady in Northern Ireland at 31-years-old. I remember my first day very well - I'll never forget it. My youngest child was just three years old and my eldest was five, so I remember my neighbour looked after my youngest while I was at work."

Isabella said the biggest change in her job was the increase of traffic in the town.

"The traffic is unbelievable now, especially in the mornings at 8.50am. You see all sorts - drivers drinking coffee and even eating their breakfast from a bowl on their knee!"

Even after four decades, Isabella has as much enthusiasm for the job now as she ever did – demonstrated by the fact she has never had a sick day!

"I really love September when I get to see all the new faces,” she said.

Indeed, Isabella, who loves to jog as part of her regular daily exercise, is looking forward to a well-deserved Christmas break – and she has no plans to call it a day just yet!

Specsavers Newtownabbey director Tony McGinn, said: “This is a vital role for the safety of pedestrians of all ages outside schools across the country as traffic can be unpredictable during busy school pick up and drop off times.

“It is reassuring to parents and carers to know that their children are in safe hands with someone as diligent to their job as Isabella.