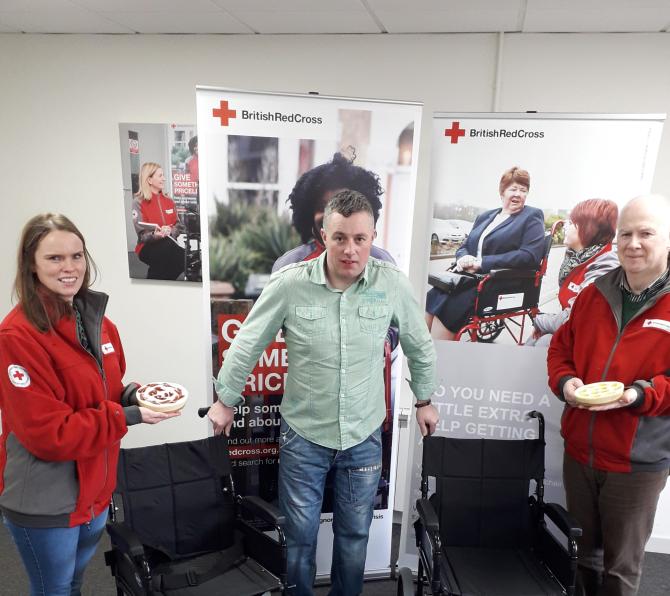 An Omagh man whose life has been transformed through the help of a charity having almost died after suffering a serious industrial accident is now looking forward to Christmas.

Alan Donnell’s pelvis, legs and ankle were crushed on October 12 in 2018 when a four tonne crate blade fell on him while at his work.

Rushed to Omagh Hospital and Primary Care Complex prior to being airlifted to the Royal Victoria Hospital in Belfast, father-of-four Alan had to have a blood transfusion and spent five weeks in intensive care.

The long, hard recovery process came next with Red Cross NI stepping in to provide Alan with much needed support in the form of a wheelchair which Julie – who is now his full-time carer – says has been a ‘lifeline’ for her husband.

Speaking about how important the Red Cross wheelchair has proved for Alan, who will celebrate his 40th birthday in July, Julie said: “They wanted him to go to Musgrave for rehabilitation but we said no. We did it at home.

“He was used to working from 7am to 11pm, sometimes 50/60 hours per week but after the accident he couldn’t bear the weight on his feet. The physio got him a foot x-ray which showed his foot was broken.

“The wheelchair has helped him get around. It brought him out of himself. It was amazing. We couldn’t have done without it."

Having undertook up to six hours of physio every day from his home on Mullaghmenagh Meadows, Alan has been able to transform his life and can now walk unaided. This is something he thought wasn't possible when he was in the pits of depression in the aftermath of the accident.

“Money wouldn’t buy back what Alan got back from the wheelchair. It has been a lifeline to use.”

“He had five open fractures and a bone was sticking out of his leg. I thought he’d lost his legs but the nurses said it was amazing what medicine could do these days and to wait and see.

“Alan suffered strokes and suffered embolism syndrome. The only thing he could say was “yeah” but he had no recollection and didn’t know what you said to him. He couldn’t suck out of a straw.

“For three hours we thought he was dead. He was rushed to Omagh hospital and air lifted to the RVH. The Air Ambulance was amazing. They were first class people. The A&E doctors and nurses were amazing in Omagh hospital.

“He started making headway after he had a blood transfusion. He was five weeks under the care of intensive care in the RVH fracture unit.

“He then started going from strength to strength and his mobility started to be discussed and that’s where Red Cross NI came in with the wheelchair."

The Donnell family ‘wanted to give something back’ to Red Cross NI and have been raising money for the organisation recently.

“We had cheesecake sales over Christmas last year. We raised £325 selling 50 cheesecakes in aid of the Red Cross wheelchair service plus a friend of the family donated £200 to a Just Giving page. Altogether it will fund five wheelchairs,” added Julie.

"It has been a traumatic and dramatic year. But thanks to the help of everyone we are almost out the other side. We have to adjust our lives and we would do anything to go back to our old ‘normal’ lives, but we are very lucky – there are a lot more people out there worse off than us and not getting the help they need.

“We are looking forward to Christmas – the best time of the year. Everyone will be off together, I love it.”