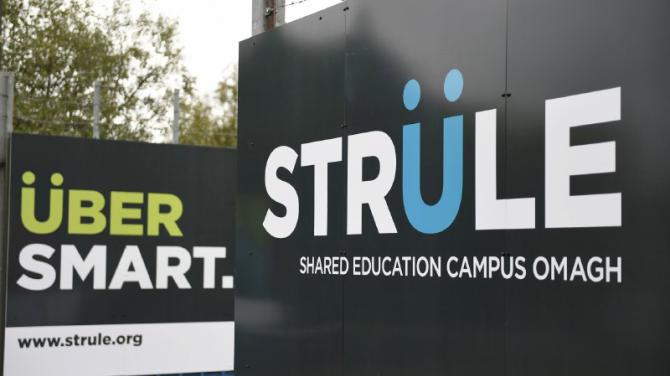 THE Strule Shared Education Campus in Omagh is now estimated to be four years late and 27 per cent over budget, a report has warned.

A report published by the NI Audit Office has warned that a series of major government projects across Northern Ireland are running years late and millions over budget, including Omagh's flagship project.

About 4,000 pupils will eventually go to school on the campus, which includes some shared areas, such as a school of performance, sports facilities and an ecology centre.

Work began on the site in 2013, and all of the new schools were due to open to pupils in September 2020.

However, the current working assumption for completion is 2024.

The report states the main cause of the delay was owing to a decision to suspend the project because only one bidder remained in the tender process.

There had been complications with tendering for the development amid "ongoing uncertainty" around the Department of Education's capital budget for 2018-19.

As well as being delayed, the total cost is now estimated at up to £212.3 million, the report states, an increase on the initial estimated cost of £168.9m.

West Tyrone MLA., Daniel McCrossan – who believes the responsibility lies with ‘political ineptitutde’ - said the people of Omagh, as well as teachers, parents and the public alike, will be disappointed by the news.

“The Audit Office report is deeply concerning albeit not surprising,” he said. “£45 million of public funds will have been wasted on a mixture of civil servant incompetence and political abandonment.

“Schools have bought into this scheme, promised state of the art facilities. But these promises have now fallen foul due to political ineptitude.

“It is now a realistic position that unless Stormont is reinstated, that this project could be shelved. I have no faith that any British Minister will prioritise this scheme, provide funding or progress the project when there is no local Government lobbying for it.

“Sinn Fein and the DUP have again shown how their bickering and politicking is impacting on local people. It’s time for them to put up or shut up in terms of delivering for local people.

“We need accountability and we need Ministers, and Stormont, pushing through projects like Strule that can transform education in Tyrone.”

"The outline business case, approved in 2013, set out the value for money of the project and determined the preferred option.

It did not seek approval of the construction costs, which were based on early designs and calculated at £125.2m, including Optimism Bias,” the report continued.

"Department of Finance (DoF) gave approval to proceed, with a requirement to produce an addendum to Outline Business Case 2 (OBC2), to include inter alia (among other things), reﬁned construction cost estimates arising from more detailed design work.”

A separate business case approved in 2013 led to the procurement of a professional services team to take forward the detailed design work, ﬁnancial and legal aspects of the project. This work was estimated to cost £10.3 million. Current expenditure against this to the end of March 2019 is £5.1 million.

Another business case was prepared in 2013 and approved by DoF for completion of construction Phase 1, which involved partial demolition and the construction of Arvalee School and Resource Centre at an estimated cost of £14.2 million.

"This project was undertaken in advance of the construction of the remainder of facilities at the instruction of the then Minister for Education, in order to urgently replace accommodation for Arvalee, which was extensively damaged by ﬁre in the summer of 2012 and resulted in expenditure against the business case approval of £11.3 million.

"As required, the addendum to OBC2 was developed in 2016, based on designs at RIBA Stage C, which revised the overall construction costs, including Arvalee to £153.2 million. This figure included Optimism Bias but not inflation. A further addendum has been developed.”

Total expenditure – including client overheads and other costs - since the start of the project in 2010 to March 2019, has amounted to £37.8 million (£20.1 million Economic Pact/Fresh Start Agreement funding; and £17.7 million departmental funding).

"The estimated DE future costs to completion are currently estimated at up to £174.5 million. Therefore, the total cost of the project for DE is estimated at up to £212.3 million, including allowances for Optimism Bias, costed risk register and inflation.
"The overall costs, including costs which are to be met with others, is £213.7 million against an estimated cost of £168.9 million (the original estimate did not include inflation).