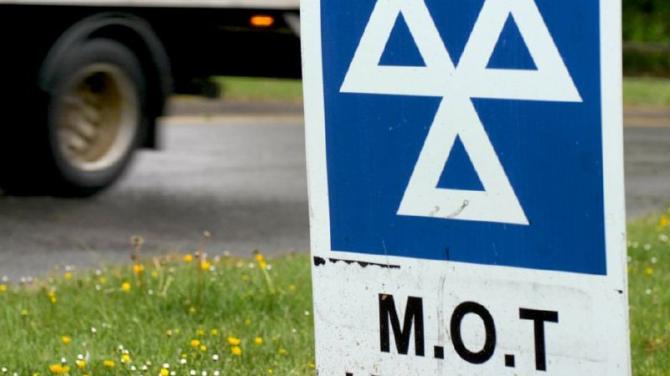 LOCAL drivers hoping to MOT their vehicles have been left bewildered amid unprecedented failings in equipment at test centres across the country.

This week, drivers in the Omagh area and beyond bore the brunt of an unexpected decision from the Department of Infrastructure to suspend all light vehicle tests, which includes cars and vans, until further notice.

The snap decision came after an in-depth inspection revealed that a worrying 48 of the 55 vehicle lifts at Northern Ireland’s test centres had signs of significant cracking, thus deeming them unsafe for use.

While repairs were attempted by the providers of the problematic lifts, insurance providers did not consider the measures adequate. As a result, testing has been suspended, with the Driver and Vehicle Agency saying that it could take weeks, or possibly months, to resolve the situation if the defective lifts have to be replaced.

And while the testing of commercial and heavy goods vehicles, which does not require lifts, has continued, local car and van owners, whose vehicles require a lift to be tested, have suffered immense disruption.

One local driver, who wished to remain anonymous, said that he wasn’t notified that his car could not be tested, and as a result he was turned away from the test centre when he arrived for his booked appointment time yesterday (Tuesday).

“I went down at the time of my appointment and was told my car could not be tested,” he said. “I was told that I will receive a letter in around 10 days, and that I would be given a four-month extension.

“I didn’t get a letter, or any kind of notification, to say that my car could not be tested. I have taken time off work to come down, and if I had gotten some confirmation that the test couldn’t be able to be fulfilled, I wouldn't have wasted my time and expense coming down to the test centre.

“I have spent money getting my car ready, and I may have to pay for further repairs and preparation in four months time.”

He said: “This situation has already caused upheaval for local people, with much uncertainty surrounding the issue in terms of getting their cars taxed and insured. There are a lot of questions for the Department of Infrastructure to answer.

“I have been informed that when the lifts were put in, the working life was 200,000 vehicle tests. I am led to believe that these lifts have tested in excess of  400,000 vehicles – over double the life expectancy of the lifts. This has been allowed to run on, and now it’s looking like all lifts need to be replaced, because inspectors have found that welding them isn't sufficient.

“There are a lot of of things that need to be addressed, and I firmly believe that the Minister for Infrastructure needs to come and make a definite statement to provide further clarity, and to state exactly what direction the department intends on taking to move forward with this situation.

“The reality is that people have continued to come to the test centre and have taken time off work only to be told there are no tests being carried out.