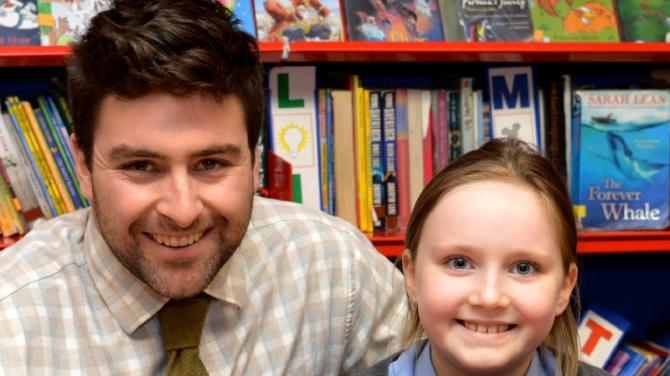 A pupil at Gibson Primary School in Omagh has been named the overall winner in a UK-wide film review writing competition.

Nine-year-old Eva Baxter came out top out of an incredible 1,853 entries and 112 schools.

Eva and her classmates from Year 5 attended a festival screening of the documentary film, ‘The Eagle Huntress’, a film about the first female eagle hunter.

The film inspired the children to follow their dreams by telling the story of a young girl who became a champion in a male dominated activity.

A school spokesperson said: “This opportunity came about as part of the 2019 Into Film Festival. The children thoroughly enjoyed the private screening at the Strule Arts Centre and were motivated to flex their English, comprehension and analytical skills by writing a 300 word review about the film they had enjoyed.

“The classes were taught how to write a top review by using writing tips from Ali Plumb, a film critic for Radio 1 and 1xtra!”

Her achievement was rewarded with an Amazon Fire HD 8 tablet to enjoy herself and £200 of cinema vouchers for her year group.”

Of Eva’s entry the judges remarked: “The standard was incredibly high this year, and what we specifically liked about Eva’s review is her use of very honest and strong descriptive writing skills and also the effect the film had upon her personally - by being inspired that anything is possible.”