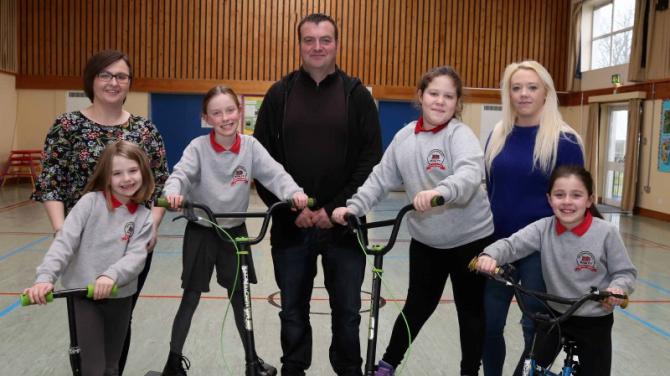 A Newtownstewart Primary School has benefited greatly from kind donations from members of the public, with the new addition of bicycles and scooters for Primary three, four and five pupils, in a bid to promote outdoor play and exercise.

Newtownstewart Model Primary School and its 70 pupils are now cruising through the playground in their news toys, all thanks to the 'Friends of the Model' group.

Teacher Paul McKernan, said the school was 'overwhelmed' by the generosity of the public.

Commenting on how the novel idea came about, Mr McKernan, said: "We have a very active 'Friends of the Model' group, which allows all family and members of the community to become involved in helping the school. At our first meeting this year one of the parents came up with the idea that we needed more outdoor play and we discussed the best way to go about it as they can obviously be quite expensive.

"The parents then suggested that we ask for donations and subsequently the group went off and put the message out there on social media and other outlets, as well as contacting parents and grandparents. Then the donations came flooding in.

"We are all overwhelmed and extremely happy with all the donations we have received thus far. We value ourselves as being very much a part of the community. The donations are still ongoing and we are always looking for the best way and value to get things for the school."

Newtownstewart Model PS currently has an after school club for the younger children and are also looking donations for that, such as board games etc.

Since Mr McKernan came to the school in September last year, he has had a major push on all things active for the children.

"We have been working a lot with the children on mental health and one of the programmes we are working on is called the '10 keys of happiness' and one of the things on that list is exercise and developing relationships," explained Mr McKernan.

"We have also done a lot of work in our nature area with the children, being active and working together. Week in, week out staff and pupils plan what they are going to do activity wise and bring resources with them. Because we believe in outdoor play we invest a lot of time into it, a school should be active for all ages."