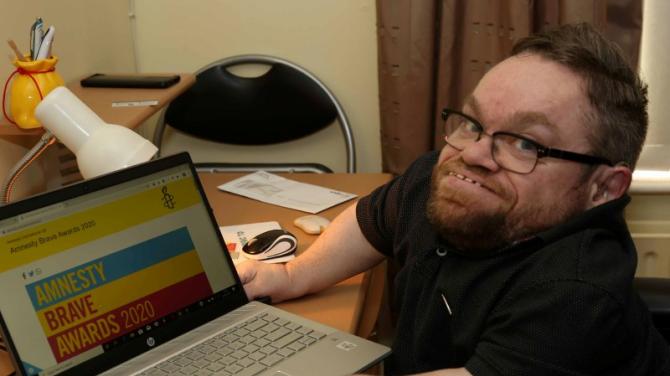 Local disability rights campaigner, Dermot Devlin, has been named a winner of a prestigious award that recognises 'human rights defenders' who are at the forefront of fighting for human rights across the UK.

The Greencastle man, born with a rare degenerative disease, was named as one of a handful of winners of Amnesty's Brave Award in the United Kingdom.

Dermot, who is just one of 15 people in Northern Ireland with the life-limiting condition Mucopolysaccharides Morquio, was named as the Northern Ireland recipient, along with 17-year-old climate campaigner Anna Kernahan from Belfast.

"It was a great honour to be nominated for the award," beamed Dermot. "There are so many people out there doing great work, so once I found out I had won it, I couldn't believe it. It hasn't sunk in yet!"

Amnesty UK want to recognise ordinary people with extraordinary passion and exceptional determination who stand up for human rights, care about justice and equality and who strive to make a difference for themselves and their communities.

And Dermot certainly qualified for the criteria.

A disability advocate, he founded 'My Way Access', an online directory built by people with disabilities, for people disabilities which informs users about the accessibility of businesses.

Dermot has worked on disability rights legislation with Northern Ireland’s Equality Commission and Human Rights Commission, and with the UN.

He also blogs about disability rights, and volunteers with Fermanagh and Omagh District Council as vice-chairperson of its disability advisory group.

"Every day, human rights defenders up and down the country are at the forefront of defending and furthering human rights for us all, making our communities more just and fairer", said Kate Allen, director of Amnesty UK.

"They are people from all walks of life, with a shared passion and determination for justice and equality."

As much of an honour as receiving this award is, Dermot says his focus remains on improving the lives of others.

Grainne Teggart, Amnesty UK’s Northern Ireland campaigns manager, said Dermot's contribution to society has been "invaluable", adding that his story of activism would "inspire many".