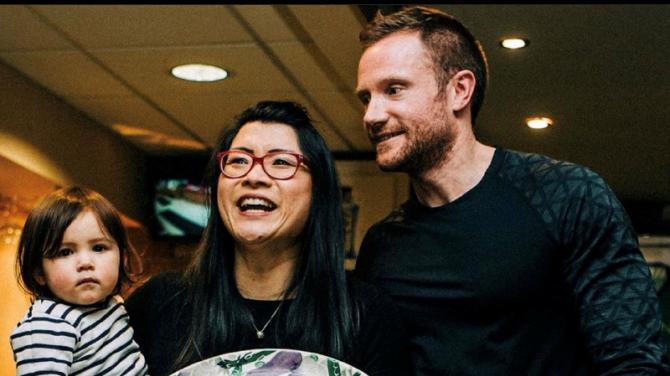 AN Omagh Academy teacher has expressed 'immense pride' for his wife after she was crowned the winner of the BBC's 'Best Home Cook'!

Suzie Abuthnot impressed the 'Queen of Cakes' Mary Berry, with her ultimate three-course dinner party in the final of the televised competition on February 20.

Speaking to the Tyrone Constitution yesterday (Tuesday) her proud husband, Omagh Academy psychology teacher, Steven Abuthnot, 36, revealed that he had to keep the news of her phenomenal success on the show quiet for nearly a year.

Mr Abuthnot, a teacher at the Academy for the past 10 years and who lives in Lisburn with wife of eight years, Suzie and their two children, Zander, five and Odelia, two, recalled the process which Suzie had to go through: "It was pre-recorded last year and finished around this time last year, so we have known about it for some quite time as a family. Every week we watched it knowing the news and it was so tough to keep it to ourselves, but as the show went on people got more and more intrigued.

"We had to dodge more and more questions but it is now a weight off our shoulders and we can all celebrate and breathe a sigh of relief!" he added. "We were not expecting the reaction we have got and it is great that we are able to put ourselves on the map. The whole family has been waiting for that moment when the rest of the UK found out."

Suzie was originally first reserve on 'Great British Bake Off', where this all stemmed from, which was three-years-ago. She was back and forth to London for the first few weeks, incase someone was sick and had to leave the show, she would then take their place.

Suzie never did make it on as a first reserve, but she was gave some encouraging words from the production team, as Mr Abuthont explained: "She was then told to re-apply but we then had our second child so that put things on hold for a while."

However, it was when a friend of Suzie's tagged her on a post on Facebook about the Best Home Cook that she applied on the last day of applications.

Following the initial application and interview, a team from the show then came to Belfast to try out her food and after all that she finally got into the last group, and as Mr Abuthnot said, "the rest was history!"

"The kids at school were great, I wanted to be quiet and modest about it but I had to announce it in year assembly. The kids were coming and talking to me about it so I tried to be professional about the whole thing but to be honest the kids really wanted to engage with me about it all and I can't help but be proud of my wife.

"I'm very very proud of her we knew she was always capable and she has now been given this bit of self belief and confidence. It will be her career now!," he added.