Omagh woman reveals her distress after airport chaos at Cambodia 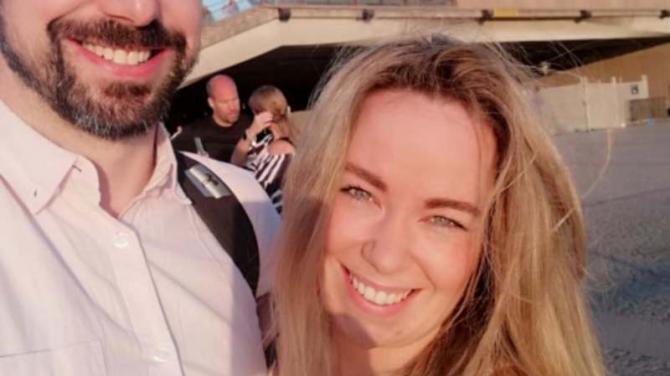 An Omagh woman has revealed her distress after she and her fiancé were left stranded in Cambodia due to the coronavirus outbreak.

Blanaid Loughran and her fiance, Steven, left Northern Ireland to embark on an exciting adventure in January 2019, resigning from their jobs and obtaining a temporary working visa in Australia for a year.

The couple became engaged in Fiji before they planned an extended trip home which would include visiting Bali, Philippines, Cambodia and Vietnam.

However, it was in Cambodia where disaster struck.

"When we booked and paid and planned all of this trip, Covid-19 wasn't even a word in the global vocabulary. However, as we travelled, it became obvious that this was a concern, but we couldn't imagine how much," said Blanaid.

"Cambodia was our second last destination and we had planned to visit the two major cities, Phnom Penh and Siem Reap. Phnom Penh, the capital, was obviously affected by the virus, but when we arrived in Siem Reap the effects of this virus were devastating.

"Many businesses had closed already and the places we visited were empty. In fact, the hotel where we stayed for a week only had another set of guests for two nights.

"The market, which is normally buzzing, was so quiet and eerie. The major temple complex, Angkor Wat, was including a complimentary extra day in all ticket sales to encourage visitors to hire drivers, guides and so on for two days.

"There was no panic buying and food was readily available. However, vendors and business owners were, understandably, very concerned about their livelihoods as the tourist industry waned."

On Saturday, March 14, the couple were due to fly to Vietnam, and having booked their flights back in October, there was no indication of what could have happened.

"We checked out of our hotel and went to the airport. I was a little concerned as our e-visas were still in process, but since we had paid for them and had applied for them long before the cut off date, I thought it would simply be an administration error.

"However, when we arrived at the check-in desk we were simply told we would not be boarding the flight as the Vietnamese government had only recently announced a blanket ban on all UK passports, which we were travelling on. We had no choice but to return to our hotel.

"That is when I started to panic. I knew we had to get home. Our Cambodian visas were only valid until early April and harsh fines apply for overstaying these visas. We knew we would have to cut our holiday short and try to get home early, somehow. "The couple spent the next two days trying to contact support agencies.

"Effectively, this challenge would be one we must tackle alone and no support agencies would be providing any support, financially or otherwise.

"We felt trapped. We kept reminding ourselves that it was a beautiful place to be trapped in but we knew the reality was we needed to return home and this was becoming more and more difficult."

In the end, the couple struck lucky, after flying to the country's capital city.

"Qatar Airways made a promise to honour all bookings made before this outbreak so when we visited their office we explained our situation and, without question, they rerouted our flight from Cambodia to Dublin for the following Saturday.

"The relief was incredible. In fact, I cried as, by this stage, we were so used to hearing the word 'no' it was such a mercy to be given help.

"We were careful not to get our hopes up too much as countries were closing their borders every day and we had three days to wait for this flight which was due to transit through Doha."

While at the airport, there was chaos everywhere.

"There were arguments between staff and travellers; everyone was on edge. Everyone seemed a bit unsure of the protocol as everything was changing by the hour.

"A member of staff advised us that she wasn't sure if we were going to be allowed to fly as she checked our passports. However, finally we were checked in and boarded the flight!"

It was a terrifying experience for the couple and so distressed was Blanaid, she suffered nightmares.

Now back at home, she admits Omagh is very different to the town she left 14 months ago.

"It's a strange feeling. Ever since I left I have had visions of what it would be to come home. I had imagined a series of cosy evenings and crisp country walks; cooking and eating and drinking with my loved ones; meeting and cuddling my new niece and playing with my nephew who I haven't seen in over a year; nights out with my friends and visiting Scotland to see my fiancé's family and friends.

"The reality is so different. It is a crime to do any of these things and, besides the law, it is reckless and dangerous. I know the whole world is going through the same thing, but it feels so strange. I just hope that soon we can go back to normal, which seems like bliss now."

"The day after we arrived home while watching the BBC news, we saw a girl who is stranded in Cambodia," she said.

"She followed the same route as us by travelling to the capital city to visit various agencies in person, as the email and phone advice was unsatisfactory and difficult to obtain.

"However, she was one day behind us and she is stuck now. She said the hotels were shutting down in a few days and that she would be unable to get home and didn't know where she would sleep. My heart broke for that girl and others like her."