Businesses unite to raise over £22,000 for front line NHS staff 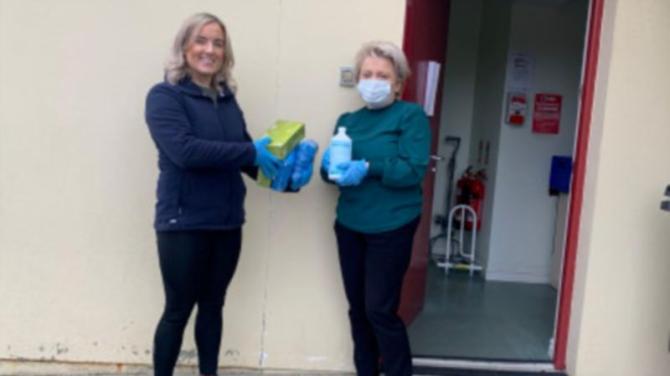 A number of businesses from across Tyrone and Fermanagh have come together to provide vital personal protection equipment (PPE) for local front line health staff and they have already raised an astonishing sum of money.

At the time of going to press, over £22,000 had been raised by the generous business owners who have labelled themselves as 'Salons in Support'. Among the kind-hearted business owners taking part is Del Loughran, who owns Del's Hairdressing and Makeup in Sixmilecross.

The money will be used to buy PPE for community district nurses, organisations such as Glen Caring, Three Spires Surgery, other local GP surgeries, as well as Omagh Hospital and Primary Care Complex and South West Acute Hospital (SWAH), Enniskillen.

"Initially we made a Whatsapp group for salons throughout Tyrone and Fermanagh to support each other and ask questions at this difficult time," said Del.

"One of the girls said that she had left gloves into the SWAH and someone else suggested that we put money together to buy a load of gloves.”

From here, the generosity just snowballed.

"Over 70 salons put money together and we ended up giving over 19,000 pairs of gloves to the hospitals. The look on the recipient's face when you hand them a bundle of stuff is just something else. It makes it all worthwhile.

"People have been contacting us separately asking how they could help and have even donated shampoo and conditioner for the front line staff.

"We have had requests from nurses and GPs and other hospitals, and Marie Curie was in touch too. We wanted to focus on providing PPE because that's what they are in desperate need of."

A GoFund page was soon established and today it stands at well over £22,000.

"Initially, I thought if we got to £5,000 it would be fantastic," added Del. "I can't get over it - people are just so kind. At a time where businesses are closed, people are out of work - and yet they are still able to give. I think it's amazing."

"When I first heard we had to close I was absolutely devastated," said Del. "It was scary for people's mental health, but the WhatsApp group was set up pretty quickly and because we were talking every day I didn't feel alone in this situation.

"When we started the volunteering and fundraising, we have all been flat out. I haven't had the time to think of anything else!".