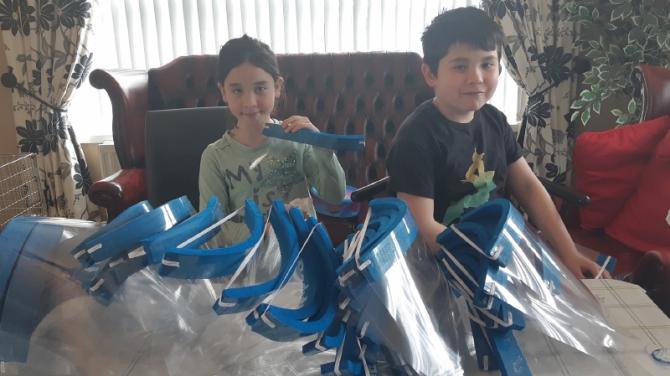 A kind-hearted native of the Philippines is making hundreds of visors as a way of "giving back" to the community in Tyrone and further afield.

Ana Liezhel Mullan, once a resident of Omagh and now living in Sixmilecross, has already made 500 visors which are benefiting health care workers across the Western Trust and by Monday, she had been asked to make another 300. The first batch were donated to the cardiology department at Altnagelvin Hospital, Londonderry.

"We have also received a request to supply the health centre in Irvinestown. There are so many people outside of Omagh in need of help so we are just trying to do as much as we can."

Amongst the departments which have benefited from the equipment in Omagh are the palliative and renal wards; the X-ray and occupational therapy departments; as well as the district nurses and the community respiratory team. The staff at Harold McCauley House are also very appreciative of their donation.

For her efforts, Ana received a very kind letter from the nurses within the Western Trust thanking her for the heartfelt donations.

"They told me it's a better quality than they had!," laughed Ana. "It's great to hear this kind of compliment. It really keeps me motivated."

The community of Omagh and the surrounding villages were very generous when the Typhoon Haiyan disaster struck in the Philippines in 2013 - which claimed the lives of over 6,000 people - and Ana has never forgotten the kindness of local people.

"This is just my way of giving back to the community," she said. "With the help of my family here, we arranged funds for the Philippines and the response within three weeks was unreal."