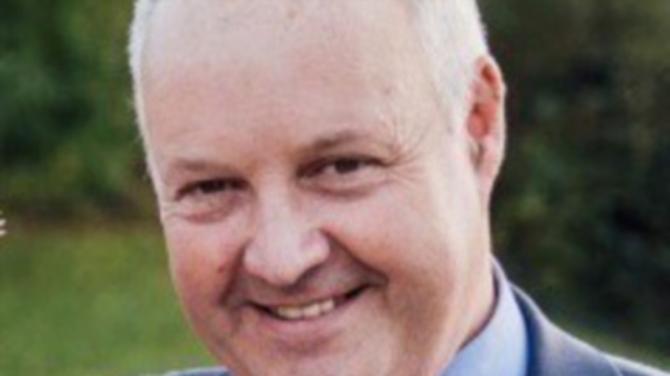 THE family of the late David Montgomery, a highly-respected businessman from Dromore who had contracted COVID-19, are still coming to terms with his death.

A man of strong Christian faith, Mr Montgomery, was laid to rest at Togherdoo Methodist Church on Monday afternoon, two days after his passing, following a two-week battle with the disease in the South West Acute Hospital, Enniskillen.

He has been described as "hard-working, strong farmer", who had no known underlying health problems.

After displaying symptoms of the virus, Mr Montgomery was brought to hospital on Friday, March 27, and was put on a ventilator the following day. He continued to receive treatment in the Intensive Care Unit in Enniskillen until the heartbreaking decision was made to withdraw treatment on Saturday, April 11.

"He thought that he had got a dose of a bad cold initially," explained his sister Anne. "He had quite a high temperature - he was shivering - and he had a cough, which got worse."

Mr Montgomery - who owned his own contracting business and was also a farmer - fought the disease with everything he had and the NHS staff, who Anne described as 'outstanding', gave their all, but unfortunately it wasn't enough.

"His lungs were really badly damaged and a lot of the time he was requiring between 90 and 100 per cent oxygen. Unfortunately they had to withdraw treatment," said Anne.

"The care he received was unbelievable. The staff risk their lives working with patients and they did the utmost to save his life. We can't thank them enough.

"People from all over the world had been praying for David - and the family were really comforted by this - but God's plan was to take him to a better place in Heaven."

Paying tribute to her brother, Anne said: "He was an enterprising farmer and agricultural contractor.

"A real character, he was always full of craic and up to mischief. He could have fitted in with any crowd. He was a people's person; very sociable.

"He was a devout Christian and a faithful member of Togherdoo Methodist Church. He would have attended other church meetings and bible studies, which he really enjoyed."

Mr Montgomery was "adored" by his family, Anne said. Clive, who is one of 13 nephews and nieces, took to Facebook to express his love for his uncle.

"David you were more a friend than an uncle," wrote Clive.

"I am so thankful for the countless memories we have together over the years, you were a real character, always full of craic and up to mischief. There truly was never a dull moment with you.

"Your house was a social hub for us and there was hardly a week we wouldn’t have been down for Mullaghmore tart, tea and plenty of debate!

"You had an incredible wit and would never miss an opportunity to give a cheeky dig, always in good humour. I think we gave each other as good as we got!

"I thank you for the experience you have given myself and many others driving your machinery, for the wisdom you shared and the encouragement you gave.

"Our trips to all the machinery shows and fellowship after the Christian meetings will never be the same. You are and will be sorely missed."

The family would like to hold a thanksgiving service later in the year, but they were "touched" by the large number of mourners - observing social distancing measures - who lined the roads on the day of his burial.

"It was very, very touching to see all the neighbours and friends, some of whom had travelled distances to be there," said Anne.

"The support from the community has been unbelievable. Our phones have never stopped - text messages, phone calls - some going off at the same time. We are so, so grateful."

Mr Montgomery's death has come as a shock to everyone in the locality and it emphasises how dangerous COVID-19 really is.

"David was so young," added Anne. "I don't think people are taking the situation seriously enough. It's an invisible killer.

"You daren't go close to people; you must stay two metres apart and wash your hands. That is very important."

"David was a strong, hard-working farmer. It shows that age has little bearing on this disease. It's up to people to keep their distances and stay at home," said Mr Wilson.

"It must be a great shock and loss to the family, and I would pass on my deepest sympathies to them."

"David was one of nature's gentlemen," said West Tyrone councillor Allan Rainey, who also expressed his condolences to the family, while councillor Glenn Campbell also extended his sympathies.

Meanwhile, a spokesperson for Lakemount Temperance LOL 408 said: "The members of our lodge are all deeply saddened by the death of our worshipful master, David. He set an excellent example of the Christian values of the Orange Order and he was highly respected by all for his integrity and friendship and all within the local farming community and beyond."

Mr Montgomery was the dearly loved son of the late George and Winifred, and a devoted brother of Anne, Liz, Helen and the late Philip.