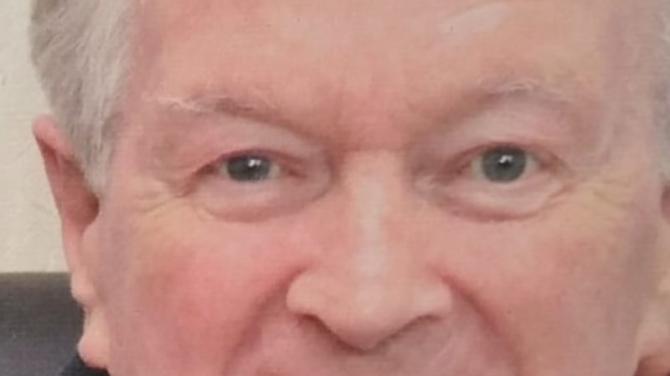 THE heartbroken son of highly-respected and well-known Omagh businessman, Patrick Cleary, who passed away after contracting COVID-19 has paid tribute to "an utter gentleman".

A well-known and highly respected tailor, Mr Cleary ran his very successful business on George's Street for over three decades.

Omagh fell silent on Saturday morning as his cortège made its way through the town - starting at Ardmore Avenue, down the Tamlaght Road and, poignantly, through George's Street before making its way to Drumragh Cemetery where parish priest, Rev Eugene Hasson, made a short reading.

In a testament to how popular Mr Cleary was, a large number of mourners - observing social distance measures - lined the route to pay their respects.

His son, James, said his family was devastated not to have the privilege of holding a wake or funeral for their loved one.

"It was surreal. He was a devout Christian and would have attended mass with my mother almost on a daily basis. To not have a mass for him was horrendous," said James.

The restrictions also meant that family members were not allowed to comfort Mr Cleary at his bedside, though James was allowed to say an emotional goodbye, kindly granted by the doctor.

"It was tough because he was isolated and he was such a social man," said James. "He was so well-known. For him to be sitting in a room, totally isolated and nobody seeing him, no family, that was devastating for all of us, dad included."

Describing the NHS staff as "absolutely fantastic", James said they went above and beyond their call of duty.

"They were so conscientious. So decent and respectful to dad. They allowed me to gown-up and say goodbye on behalf of our family. We were able to FaceTime dad to try and communicate with him. That was so important to us.

"We would like to express our thanks to Chief Inspector Dodds, whose colleagues arrived at our house on the morning of the burial. Police allowed us to drive under escort to bring the hearse past the chapel and my father's workplace on his route to burial. That was so appreciated by his family."

Pleading for the community to stay at home and follow the government's advice on social distancing, James - who worked in health care for over 40 years - fears the NHS will not be able to cope if people fail to adhere to lockdown restrictions to stop the spread of coronavirus.

"We don't know how he acquired this disease. People need to stay at home or others will die," said James.

"At present, we haven't hit a peak in the North of Ireland when you consider the number of people dying compared to the UK. Unless we stay at home and keep social distancing, I don't think the health service will be able to cope - and I worked in the health service for 44 years."

Some weeks ago, Mr Cleary was rushed to the hospital after suffering a subdural bleed. The family thought he had fully recovered but while at home, he grew weaker by the day.

"He was brought back into hospital and was checked for COVID-19. He had no major symptoms, just this weakness," James explained.

"He developed a minor temperature and had a cough, but not a long, persistent cough that you hear about on the news, and it disappeared as quickly as it came. But it was enough for him to be swabbed.

"For such a strong, physical man, it was difficult for the family to see him become very weak.

"They screened him on Tuesday three weeks ago and he tested positive. About 10 days before he died, we were informed he had a high viral load and was put on the palliative phase and made comfortable."

Typical of his hard-working nature, Mr Cleary, at the grand age of 91, had been working right until the day he became unwell with the subdural bleed.

"All of his children had retired, but he just kept going," smiled James.

"He loved it. It wasn't so much the work, it was the whole social connection. He loved meeting people.

"He was highly regarded in the town. All of the main drapery shops used his services. Of late, certainly over the last 20 years, he was doing the alterations. Prior to that, he would have been making fitted suits."

But there was much more to his life than just tailoring. He was a keen musician and one of the highlights of his life was leading the President of Ireland, Michael D Higgins, at a special reception in Omagh a number of years ago.

"There's actually a photograph of him at home with Mr Higgins. He was very proud of that," said James.

"He was a fantastic musician; playing the accordion and guitar and he was highly renowned for playing the bagpipes."

He was a family man, who loved his wife, Mary, 94, dearly and James said his parents were 'inseparable'.

"It sounds cliched but he was a complete and utter gentleman," added James.

Extending sympathy to the Cleary family, Omagh Chamber of Commerce president, Colm Broderick, of Broderick's Bar at George's Street in the town, said he would be sorely missed.

"Pat was a familiar character around George's Street, not just for my lifetime but my father's before me. He was a friendly man, who always had a smile and wave for you," said Mr Broderick.

"He was a good man at his trade and so many people have very fond memories of him. He will be a very difficult act to follow.

"It's unfortunate we weren't able to pay our respects in the manner we could have, but my family and I met the cortege en route to the cemetery. His family are in my thoughts and prayers."

Former West Tyrone MLA., Ross Hussey, said: "[He was] one of Omagh’s best-known sons and always a gentleman to deal with."

"Oh my the town and surrounding area have lost a true gentleman," wrote Germain Kelly on social media. "Mr Cleary you were such a lovely man, may you rest in peace and may your family find comfort in how much you were so well thought of throughout the land," she added.

"He was well known by everyone in the community; he was a professional in all aspects of his life. And he was a gentleman.

"Even up until recently I saw him at his shop and he always provided a great service to the people of Omagh.

"On behalf of myself and the DUP, I want to pay tribute to Mr Cleary. I am thinking of his family and my deepest sympathies are with them."