From near-death to a homecoming in the sun, Omagh woman, 90, shares her story of hope 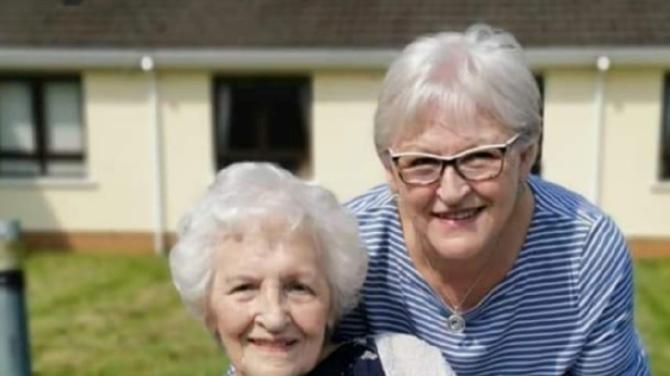 A ninety-year-old Omagh woman who miraculously recovered after contracting coronavirus has shared her story of hope.

Kathleen McCain, who has COPD, was welcomed back to her Oakland Road home on Friday by delighted family members, neighbours and friends, as well as some of the wonderful staff from the COVID-19 ward at the South West Acute Hospital in Enniskillen after battling illness for six weeks.

She said she was "just shocked" to see everyone with flags and messages of hope on her arrival home - even music was provided, in what was a carnival atmosphere in the sunshine!

It was a well-deserved home-coming for the Omagh pensioner, whose family had been resigned to losing her after she was admitted to hospital in mid-March.

Speaking to the Tyrone Constitution from her home on Monday morning, Kathleen said: "I'm feeling fine and dandy! This morning I had a nice breakfast. I got myself washed and dressed. I praised the Lord as usual that I'm here.

"I was quite unaware of anything for weeks - I wasn't aware I was ill. It was nice to start to come around and see everyone and realise how many prayers have been said for me.

"A wee person like me, just a 90-year-old woman, has survived this thanks to the Lord's work. I wouldn't have thought I would have got through it. I have got a lot to be thankful for but our Father in Heaven is the most important. He is the person who pulled me through. God was there through it all."

Kathleen, who is a member of Omagh Evangelical Presbyterian Church, had been treated at the COVID-19 ward before being transferred to Drumclay rehabilitation facility for a fortnight. She returned home on Friday past and is enjoying every moment.

"I've been blessed. I had a wee doctor and I could see by his eyes at how pleased he was that I was improving. He was a lovely person and he took great care of me. I am just delighted with him.

"It's a great hospital up there and you know this, we are blessed to have it and we don't realise how blessed we are. I got such attention from doctors, nurses, staff. It was all just perfect. I am glad I am home again, to be back in my own wee chair, and I am enjoying the sunshine!"

The Omagh lady said there is "no better healthcare staff in the world" than those at the Western Trust. "All of the staff have been so kind, generous and attentive," she added. "They are just lovely."

She also paid tribute to the staff at the Drumclay rehabilitation ward. "They are just the nicest people."

It remains a mystery to how she contracted the deadly virus.

"I don't think I was out very much. I can't understand how I got it. I just go to the town once a week and I go to church on a Sunday. Where I picked it up, I haven't a clue."

Her daughter, Gloria, said her mother had been very ill for a week before she went to hospital.

"When the hospital called and said she was positive for COVID-19 I was panic-stricken, it was awful," she said. "I thought we would never see her again and she would have suffered by herself. She has her underlying chest problems and you would have thought this would have taken her.

"She was being prayed for across the world through our prayer network."

Kathleen became unwell in the first week of March when her daughter noticed she was becoming noticeably weak.

"She was just sitting in the chair, barely able to walk. I had to walk with her and that's not usual because she's very independent. She was just getting worse.

"Nobody suspected COVID-19. On Saturday, March 14, we were told to ring the ambulance and the results of the swab came through on the Sunday."

Her form today is in stark contrast to her worrying state of health six weeks ago. "She was up before me this morning getting her breakfast," laughed Gloria. "She wants to walk around her garden now and see how everything is doing!".

What an amazing turnaround - Kathleen is a beacon of hope.