Friends come together to celebrate John's 70th - in a community 'drive-by' party! 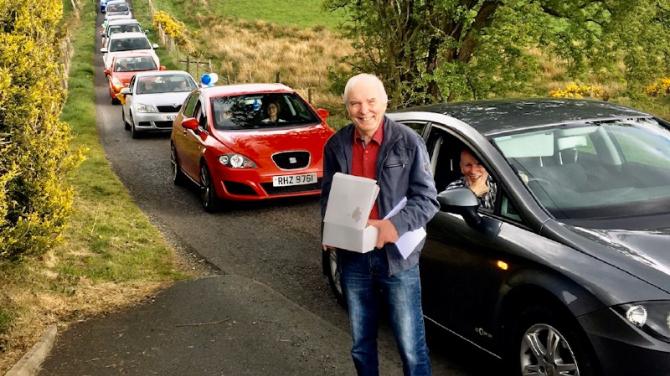 With the coronavirus outbreak restricting all human contact, the people of Loughmacrory had to put their thinking caps on to come up with a plan to celebrate the 70th birthday of hugely-popular and well-respected man, John Kelly, on Sunday past.

A very sociable man who has many friends across the community, Mr Kelly is currently isolating alone in his home in the townland of Streefe, a couple of miles outside Loughmacrory.

Those who are closest to him wanted to mark his milestone in some way and with social distancing rules prohibiting celebrations in the traditional way, it was decided a community 'drive-by' party would be held.

On Sunday, with the sun beaming on the birthday boy, up to 80 vehicles drove past his house to 'toot' their horns, wave and communicate their good-wishes from the safety of their cars.

"I really appreciated everyone coming," beamed a delighted Mr Kelly. "Things like that mean more to me than all of the money in the world. I want to thank everyone who came along, they are all good people.

"I was away for over 30 years working in London and I was out three or four nights a week socialising. I enjoy people and I really miss getting out amongst the community."

One of the organisers was West Tyrone MLA, Declan McAleer.

"John has always been very generous and kind to neighbours, rarely missing a wake or funeral, even when he lived in London for over three decades, where he worked as a taxi driver," he said.

"All of the neighbours turned out for this very special occasion. He would normally be out dancing and socialising, so we as a community wanted to show how much we appreciate and respect him.

"With the social-distancing law, this was the next best thing. Hopefully when this is all over, we will have a proper celebration in person."

Until that time comes, Mr Kelly will always have the memories of celebrating his 70th birthday in the most unique way!