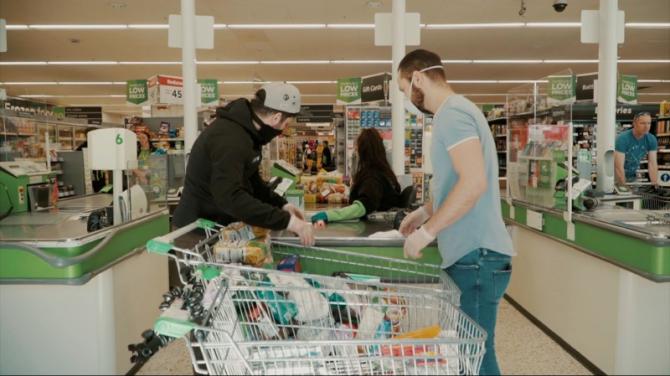 Three Omagh men who simply want to help in the midst of the coronavirus pandemic have been filming their volunteering efforts to 'Feed Omagh's Food Banks'.

"It started off as a fairly naive notion to begin with that then escalated after we got the ball rolling," said Dermott.

"We initially wanted to provide food for the local food banks but decided to also put some money towards PPE materials when we saw the support we were getting from the community.

"The three of us are doing food shops together and controlling the social media end of things also.

"Oscar is filming and creating our video/photo content to keep exposure up online while Aidan and I are taking charge of buying materials for PPE and organising food drops."

The support of the local community has been overwhelming. Some have been donating food while others have been digging deep into their pockets and at the time of going to print, the men had raised over £4,000.

Dermot continued: "There is a high demand for food in our area and a lot of people have struggled much more than usual due to this epidemic. People from all walks of life have been badly affected financially and also mentally.

"We hope that money we raise is able to alleviate some of the pressures faced by the most vulnerable in the community.

"Our main goal with this charity and our Facebook page is to raise awareness of the local food banks. Where they are and what times you can make a drop-off.

"As well as this we are also supplying them with as many products as we can. That can range from items such as non-perishables, toiletries and even pyjamas. We aim to spend a certain amount each week and we will continue doing that until the well runs dry.

"Aside from shopping and donating to local food banks, we have also purchased some PPE and materials to make full-face visors.

"Our plan with our first batch of materials is to make 1,000 face masks that we can donate to anywhere that can make use of them. This would include nursing homes, shops, local retailers, and any other front line roles where extra protection is needed. We are doing that with the help of Conor O’Doherty, a local businessman who owns CR Signs in Omagh."

Dermott continued: "We’ve managed to recruit some local musicians and DJs also. Going live on Facebook and asking for donations has been a really effective way of getting the community on board. I've also been going live on Facebook myself the past few weeks raising money while playing a few tunes for everyone staying at home during the weekends!"

People can help by donating food to their local food banks or by making a donation to their charity through GoFundMe - visit http://gf.me/u/xvstkm.

"Every little helps and no food donation is too small," Dermott said.

"We’d also like to thank everyone who has generously donated so far. We wouldn’t be able to do this without your help."