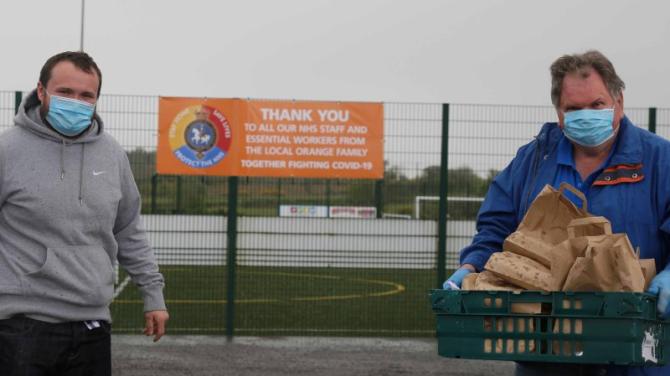 The Loyal Orange Institution lodges from the Omagh district have teamed together at this time of great need to provide free hot meals to support the most vulnerable in our community.

Delicious hot meals are being cooked up by the voluntary chefs, Dorothy Hawkes, Barbara Pinkerton and Karen Spratt, at Killycurragh hall and distributed across the area.

A representative from each of the 13 lodges in the Omagh district has been assessing the need to ensure no one is forgotten about. Thanks to a government grant, a total of 140 hot dinners were distributed on Friday past.

"We have twelve or fourteen volunteers who are delivering to different districts - from the likes of Gillygooley, Blacksessiagh, Mountjoy, Cappagh, Killycurragh, Mountfield and Omagh town," explained David Swann, deputy district master.

The initiative is designed to support the elderly, widows and people who are living on their own and in isolation. At the moment they are providing the kind-hearted and thoughtful service every Friday but it is hoped they will also be able to carry it out on a Tuesday as well in the future.

"Omagh District LOL No 11 officers ran a survey to ask local people what they would like at this time," explained Mr Swann. "Most of the people are isolating and they thought a hot meal would be most beneficial. It guarantees them a lovely hot dinner - of meat and vegetables, potatoes and gravy - at least once a week, if not twice a week."

So far, 90 families have already availed of the service but it is expected many, many more will receive their hot meals over the next few weeks.

"The feedback has been very positive - the meals are very tasty and everyone seems to be looking forward to this Friday," said Mr Swann. "It means an awful lot to people - even to have their food delivered, for someone to wave in and say hello." In these difficult times, that means the world to some.