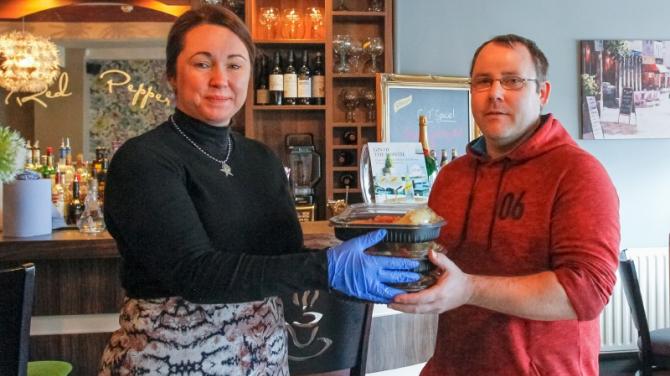 Over the last nine weeks, the owners of a popular restaurant in Castlederg have been providing thousands of meals to families in the local area.

In fact, Colin McMenamin, and his wife, Ann Marie, of the Red Pepper, have probably been busier during the coronavirus pandemic than ever before, such is the demand for their delicious free meals.

The uptake of their gesture has been phenomenal. Initially, just over 100 meals were sent out to the local community, but demand grew by the week and recently they have been providing 260 meals per day, costing between £3,000 and £3,500 every week. Indeed, Colin said it is "probably the one and only time the Red Pepper will be the busiest restaurant in Ireland".

Unfortunately, however, funding has dried up meaning the initiative has come to an end. That is regretful and a real shame, admits Colin.

"It has been really, really popular, especially in the rural areas such as Aghyaran and Spamount where people have been quite reliant on it," said Colin.

"I'm sorry it has to end but unfortunately the funding has run out. For some of the rural residents, our drivers are the only person they will see in a daily basis. They would also bring them wee bits and pieces, such as their prescription, cigarettes, shopping and newspapers.

"It was comforting for the people who live away from the area and their parents, knowing that they were getting their hot meals every day.

"Everyone has given so generously, but many are struggling now, especially the suppliers. We have done more than we ever thought we would be able to."

Colin said it had been a team effort and paid particular tribute to the local GAA club.

"Castlederg GAA club has been absolutely amazing," said Colin. "They showed up every day, taking all the meals out. When we first started, we were giving away 120 meals but within a week it went up to over 200 meals. I contacted the chairman and a WhatsApp Group was soon started and thankfully club members were able to volunteer every day. It's a real credit to them.

"Francis Connelly gave two large donations, while various community groups have also donated. Everyone has been really generous. This wasn't just the Red Pepper - we couldn't have done it without the kind donations."