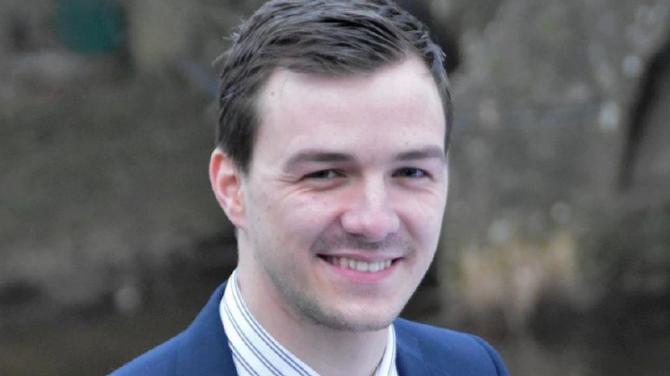 The incoming chairperson of Fermanagh and Omagh District Council is set to be Omagh town Ulster Unionist representative, Chris Smyth.

Council is due to hold its annual meeting next Monday night when current chairperson, Siobhán Currie (Sinn Féin) will hand over the chain-of-office to the UUP.

The party has confirmed that Mr Smyth, 27, who has been a councillor for Omagh town since 2014, will take up the role, while the SDLP will select a vice-chairperson.

Mr Smyth will be the first councillor from the Omagh district electoral area to take the chair since the two councils amalgamated in 2015 and will be assuming this position during the most unprecedented public health emergency in decades.

He said it was a privilege to be chosen as the incoming chairman for the place where he was born, educated and lives in, but was aware that his term would be greatly coloured by the current pandemic.

“As one of the council’s mental health champions, I hope to promote its wellbeing initiatives, which I think will be particularly important given the effect lockdown may have on the citizens of the district," he said.

"During the previous chairperson’s term, the council had to act decisively to protect the public from the coronavirus.

"I hope that we will continue to make progress on beating this virus and then we can shift our focus to emerging from the crisis in a way that both protects public health, reduces the damage to the economy and gives our citizens livelihoods to go back to.

"I really hope that the various parties and independents of the council can come together and tackle the difficult decisions we are going to have to make in a collegiate manner.

"It's going to be a steep learning curve for me. Chairman of the council is a heavy responsibility and given the unprecedented times that we operate in, the role will be very different from that of previous incumbents. That said I am ready to learn and to perform this role to the very best of my ability for all the people of the district.”

The schedule of the allocation of the various positions of responsibility over the course of the council four year term (2019-2023), based on the D'Hondt methodology, was agreed at the first meeting of the current council term in May last year.

@fermanaghomagh.com no later than 5pm on Friday, May 29."