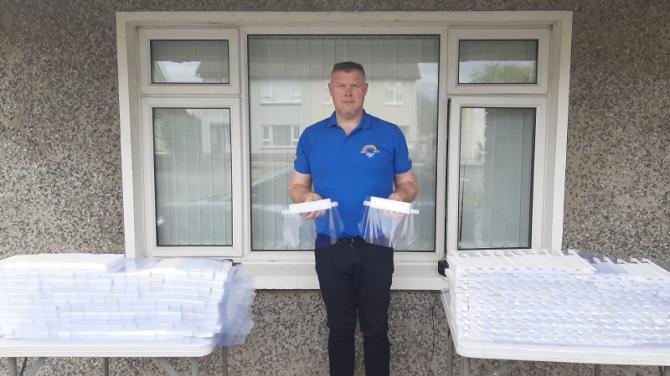 A businessman from Kesh who is splitting his time between his full-time job and volunteering has created over 5,000 face visors to help protect front line heroes in their battle against coronavirus.

Raymond Ginn has been making up to 200 visors per day since coming across a home tutorial video on social media.

Many local hospitals and care homes have been the beneficiaries but he has also delivered the personal protective equipment to Belfast, Ballymoney, Ballyclare, Newtownwards and the Daisyhill Hospital, Newry, as well as to the Republic of Ireland and parts of England.

Self-employed with a printing and embroidery business, Raymond has rarely been busier, as he wakes up early to fulfil his full-time duties and spends much of the day volunteering.

"I wanted to give something back to the people I've been working with so I started up by making 100 myself," said Raymond.

"I set up a group on Facebook called Faceguards NI and a GoFundMe page and it has spiralled from there. I can make 200 in one day and I'm working pretty much every day including Saturday and Sunday."

With more people gradually easing themselves back into work, Raymond is only going to get busier. But the weather has been kind - and the public even kinder!

"I have to thank everyone who has been so kind," continued Raymond. "On the days the weather has been good, I've been sitting out at the front of my house and people have been coming with ice cream, meals and sweets to help keep me going."

Raymond would like to thank everyone who has donated to his Go Fund Me page. "Without the donations, I wouldn't be able to do what I am doing," he said.

He would also express thanks to local businesses that have helped him, especially Enniskillen Business Equipment and NU-Style Upholstery, Ballinamallard. "They have been going over and above to keep me stocked up with supplies to make the visors."