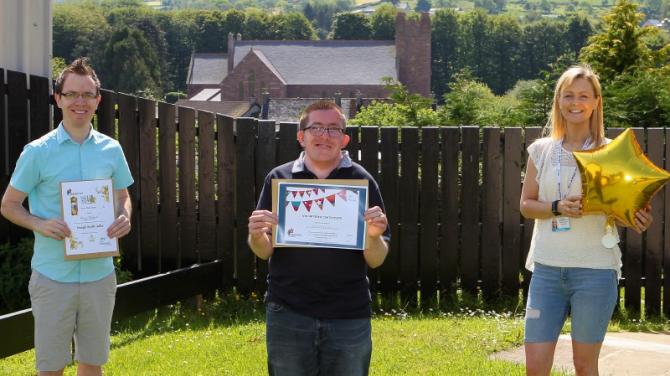 An Omagh man who is a long-standing volunteer of Omagh Youth Centre has been presented with the prestigious Kerry Clarke Award.

The competition, run by Omagh Volunteer Centre (OVC), is designed to recognise the most outstanding volunteers in the community and the 'Gold Star of Excellence Award' is named after Kerry, who was an integral member of the Good Morning Omagh project.

"He began as a member of our 15+ learning disabled club over 10 years ago. He sadly lost his mother and yet showed great strength and courage to continue attending the Centre weekly, as she has wished for him to build up a social outlet for himself, which he did.

"When he had outgrown the 15+ club, he still felt a strong connection to the Centre and so challenged himself to take on and become a valued member of the volunteer team.

"Darren is one of our meet and greet volunteers who welcomes all our members on Monday and Tuesday nights. In completing this role, he ensures that all young people are members and that they sign in.

"Once this role is complete, he comes downstairs into the hub of activities in the Centre and provides further help in delivering or setting up activities; helping and encouraging other members to take part, etc.

"Darren is a character and provides good fun for all of the members and thoroughly enjoys his role participating in all the different activities and meeting new people. He gets on extremely well with the leaders and enjoys good banter!"

Darren's volunteer role helped him take up opportunities within the EA Youth Service. For example, he participated in the North West Youth Forum for Peace and Reconciliation, which he particularly enjoyed and met many friends.

He also completed training through the Forum; an Open College Network (OCN) in Good relations and an OCN in Peer Leadership. This role developed further whereby he sat on the 'Make a Difference' panel who awarded small grants to EA Youth groups and was part of the organising committee who developed peace camps and a concert called "Rock On Against Racism".

The spokesperson continued: "The experiences he received were fantastic and a highlight for him was an educational visit to in Liverpool which was a valuable learning experience, developing him as a person and his role within youth work.

"Darren has a busy schedule with his volunteer work in Omagh Youth Centre and he manages to wrap this around all the other roles. He also has a part-time job in Omagh Integrated PS, working for a local MLA and MENCAP.

"Darren is an independent and committed young man who ensures he carries out his duties every week in Omagh Youth Centre without fail. That is of course when he's not travelling the country to the likes of Belfast, Derry, or further afield - like Majorca and New York, never mind hitting the gym at least four times per week!"