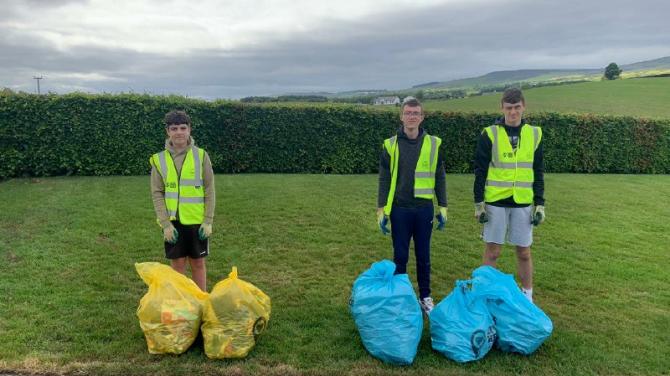 Three members of Mountjoy Boys' Brigade are doing their bit to ensure the rural roads around their village are kept clean.

Lewis Loughlin and Marc Davis, both 15, began their litter-picking exercise of the Mountjoy roads as part of their silver award community project for the Duke of Edinburgh before the coronavirus outbreak interrupted their work.

However, not to be deterred, they carried on with the initiative separately, with Lewis' brother Adam, 13, helping out in what is now a three-man operation.

"They have a plan for the area and they pick a different road each week," explained Lewis and Adam's father, Rodney. "This is a six-month project and we keep the local assessor up to date with their work. They have all the kit to carry out the work effectively.

"Part of their task is also to educate others. People are curious about what they are doing and the boys are only too happy to explain what their project is all about."

Empty energy drink cans are what they are most likely to come across during the litter-pick exercise, said Rodney.

"It seems to be the same rubbish all the time - cans, and biscuit wrappers as well. But it has been surprising how many litter bags they have filled," continued Rodney. "It is a part of their project to question why people are dumping items of this nature, to identify hotspots on the roads and why they are hotspots."

The Castletown and Beltany Roads seem to be the 'hotspots' for litter-louts, said Rodney. He fears now that restrictions are being eased, the problem with litter will become an even bigger problem on rural roads.

"With more people using the roads now I think they may come across even more," he said.

Rodney has made contact with Fermanagh and Omagh District Council, who have pledged to install signage warning people against littering.

"People have been stopping the boys to tell them they are doing a good job and giving them the thumbs-up," continued Rodney.

The council is reminding those litter of the consequences of their actions. A spokesperson said: "Council Enforcement Officers are empowered to issue a £75 fixed penalty fine to anyone found littering. In more serious incidents the matter can be brought before the magistrates' court and, upon conviction, fines of up to £2,500 can be imposed. All instances of fly-tipping/illegal dumpling are reported to the PSNI."