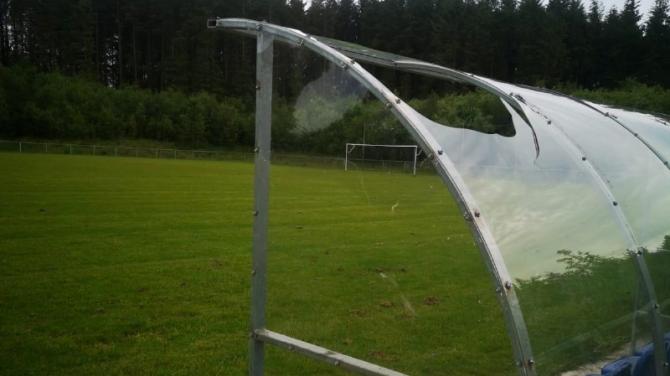 While players and coaches at Fintona Swifts await the green light for football to return, 'mindless' vandals have decided to target the club's facilities.

For the second time in less than a year, the perspex glass at the shelter for the substitutes and coaches was damaged at the Fermanagh and Western League club's pitch. It is believed to have taken place sometime on Friday after 4.30pm.

The pitch is owned by Fermanagh and Omagh District Council and ultimately it will be the taxpayer picking up the bill.

Padhraic Cunningham, a committee member, said: "There are a lot of people very annoyed about this, especially at this time, right across the community.

"You would think people would be trying to do positive things for the community rather than break things.

"There is a good community spirit at the moment, with people helping the elderly and stuff like that, but then you get idiots doing this.

"There is no motive behind this at all. We are a cross community club. It's boredom.

"It seems to be a common enough thing to happen in Fintona. There has been damage to the golf course in recent times, flower pots have been damaged - it's just stupidity.

The incident has been widely condemned on the club's Facebook page under a post which read: "It is quite difficult to work out their thought process. Let's damage the facilities which are put in place for the benefit of OUR community.

"While families struggle to make rate payments to fund council activity, these 'heroes' think it's a good time to add to the bill. Simply baffling. Think before you act."