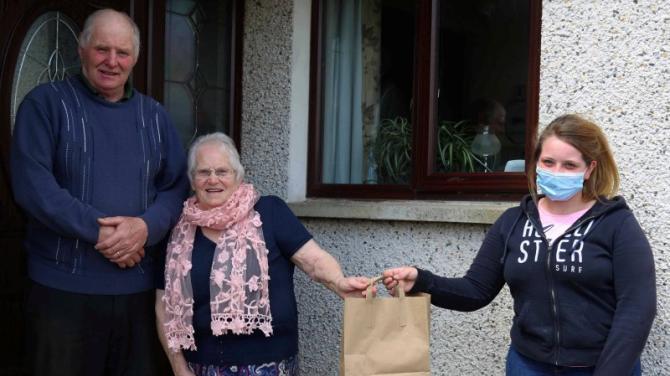 Omagh District Orange Lodge have been busy over the past six weeks providing hot meals to the elderly and most vulnerable people within the community.

Thanks to funding from the Community Foundation and donations from members of the local lodges, the district has been able to supply a free, hot nutritional mean to over 180 people every Friday.

A spokesperson from the district said: "As a district lodge we thought what could we do or provide for all those in the community who are unable to get out owing to Covid-19. After asking around, people said that they would like a hot, ready-made meal.

"Initially, we anticipated approximately 70 to 80 meals per week, but our numbers have been over 180 meals, prepared, cooked and delivered each Friday.

"A huge thank you must go to the ladies who prepare and cook these meals - Dorothy and June, who are both furloughed cooks from a local hotel and Sarah, Barbara, and Karen, who are all in the catering industry, their commitment and knowledge has been invaluable.

"Preparation starts on a Thursday evening, and all meals are cooked in Killycurragh Hall on Friday morning, members from each Lodge then come and collect the dinners and deliver them to the people’s doors in their area.

"All in all, this has proved to be a great community effort by all involved, and it has been greatly appreciated by all that receive the meals and a great rapport has been built up between everyone over the past six weeks.

"We intend on continuing this service until after Twelfth of July. Last week saw us reach 1,000 meals and so our Grand Master Edward Stevenson called in to congratulate everyone.

"Many people only see the Orange Order when out on parade, but they now see a whole new side to our Order. We are one of the largest community groups in Northern Ireland, with Lodges all over the country, in every townland.

"As a Christian organisation, we do a lot of good work which often goes unnoticed or often unreported. However, when Covid-19 struck, the Orange Order has been very much to the fore, by helping all in the community.

"We as a district lodge appeal and encourage all our members and supporters to help Co. Tyrone Grand Orange Lodge in raising £10,000 for three worthy causes, which are; Aware NI, St Johns Ambulance and Frontline Workers of the NHS, by walking five mile and donating to our Just Giving Page, which can be accessed through www.justgiving.com/crowdfunding/

"Photos can be sent through WhatsApp to 07513030398, of your participation in this fundraising initiative, and may be used on the Grand Orange Lodge of Ireland’s Facebook page."