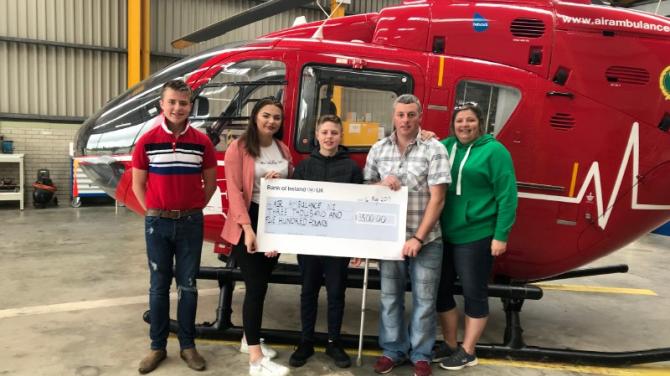 The family of an Omagh man injured in a horrific crushing incident have spoken of their enduring gratitude to Air Ambulance Northern Ireland (AANI).

Alan Donnell and his family were prepared for lockdown more than most because on October 12, 2018 Alan had a serious accident at work that left him with life-changing injuries.

Since then he has learnt how to walk and drive again, and cope with brain damage and adjust to this 'new normal' life.

What follows is Alan's story from his wife Julie's perspective.

Julie said: "Before the accident Alan could have been working up to 70 hours a week as a welder for a local company. That morning he was in work for 8am as usual and less than half an hour into his shift he was crushed by the grader blade of a digger at the waist."

Alan's work colleagues lifted the blade, put him in a jeep and took him to the nearest hospital in Omagh and it was on arrival there, that Julie received a call from the foreman to let her know an accident had occurred.

Julie continued: "It was uncanny as I was actually at the hospital when I took the call, awaiting a physio appointment. Before I saw Alan, a nurse told me to prepare myself and that I wouldn't like what I was about to see but it was imperative to keep calm.

"She told me to reassure Alan all was going to be OK, keep him chatting and press his chest to remind him to keep breathing deep breaths."

Alan had become trapped in the car outside the hospital and had to be cut out by the Northern Ireland Fire and Rescue Service.

Given the severity of his injuries, the Helicopter Emergency Medical Service (HEMS) team were tasked and arrived by air ambulance.

Julie said: "The Air Ambulance NI brought such a level of speed, efficiency and professionalism. I remember one of the team saying, in 23 minutes we'll have Alan to surgery.

"And indeed, by the time I saw the kids to tell them and drove to the Royal Victoria Hospital in Belfast, Alan had his first surgery completed."

A second surgery in hospital took over eight hours to insert titanium rods into both his legs. Unfortunately, he had some further complications to come.

The fathe of four experienced Fat Embolism Syndrome, a piece of intravascular fat that lodges within a blood vessel and causes a blockage of blood flow.

This condition is not unusual in patients with multiple long bone traumas. This then caused embolisms (similar to stroke, but instead of blood clots, it is fat from the bones) and unfortunately, permanent brain damage, affecting many aspects of Alan's day to day life.

Julie continued: "Alan spent five-and-a-half weeks in hospital and then we decided to undertake the rehabilitation from home. That was six hours a day and at times was very hard, but we were determined, and Alan has made great progress.

"He is now able to walk mostly unaided around the house and is back driving. We are receiving continuing support for Alan's brain condition but are learning to adapt to our new normal.

"I realise that everyone is adjusting to so many changes through the current health pandemic and I encourage you all to be strong and stay positive.

"My four children kept me going and even though the accident affected each one of them differently, every one of us is so grateful to the charity.

"We wanted to give something back so held a fundraiser last year. It was a country themed cowboy supper and we raised £3,500. It was supported by friends of old and new and without those, the night would not have been possible.

"In these current times when events aren't really possible, I would encourage everyone to donate what they can. It was a great experience to go to the Air Ambulance base last summer and meet the team who had helped Alan that day and be able to thank them in person."

It takes £2m each year in fundraising to keep the service operational.

Glenn O'Rorke, operational lead for the HEMS said: "Despite lockdown our team are still being tasked on one to two occasions every day.

"If a serious accident does happen, don't hesitate to call 999. Whatever the nature of the accident, our HEMS team can reach anywhere in NI in up to 25 minutes.

"We wish Alan a continued recovery and thank them so much for their generosity in supporting the service. It is only with continued support that we can fly and continue to help."

The charity is offering membership of its Club AANI for just £2 per week, a means of regular giving by direct debit at www.airambulanceni.org.