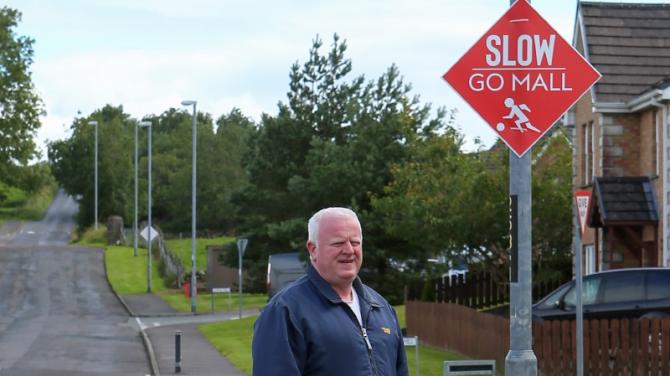 Dual language road signs that have appeared in various towns and villages in West Tyrone are being used to "antagonise" the local community, according to a unionist councillor.

Castlederg representative, Andy McKane, was speaking out after speed caution signs to drivers were erected in both English and Irish in locations such as Castlederg, Erganagh and Spamount.

A spokesperson for the Department for Infrastructure confirmed these signs have been erected without DfI permission. However,  as they are not causing a road safety issue their removal is not considered to be a priority for Departmental staff, they said.

"This is an attempt to agitate and antagonise the local community," said Mr McKane, of the UUP.

"The fact that these fakes are a distraction for drivers, could result in someone having a accident. It would seem “GO MALL” means go slow in some other language which again only adds to the confusion.

"On the back of attacks on a local Orange Hall, it would seem there are people whose only agenda is to cause harm and hurt in what should be a shared space.

"I would encourage whoever put these up to remove them immediately in case they cause an accident.

"Hopefully these illegal signs will be removed as soon as possible to cause no further offence."

Castlederg DUP councillor, Keith Kerrigan said he had been contacted by many local residents about the signs.

"Residents want to know what they mean and who gave permission for them to be placed around Castlederg," said Mr Kerrigan.

"I would state that we have nothing to fear with the Irish language, the difficulty is that it is often used as a weapon to attack members of the PUL community.

"I hear that it could have been placed in certain areas to get traffic to slow down as there is a lack of signage informing them of the speed limit. However, I would argue that in the case of entering into Hillview Park in Castlederg and Spamount village, these signs are placed on the next available post past very prominent speed signs.

"Concerns have been raised that this could be more of a territory marking exercise which would be a very backward step."

Ruairi McHugh, a Sinn Fein councillor, said local activists from his party were responsible for erecting the signs.

“Local Sinn Fein activists took on concerns from the community regarding speeding traffic and decided, in the interim, with Road Service failing to respond to the need for traffic calming measures, they would erect bilingual signage.

“I can’t see why bilingual signage would cause any offence when the primary objective is the safeguarding of our local children.

“The decision was deliberately made not to erect signs in predominantly unionist areas of Castlederg.”