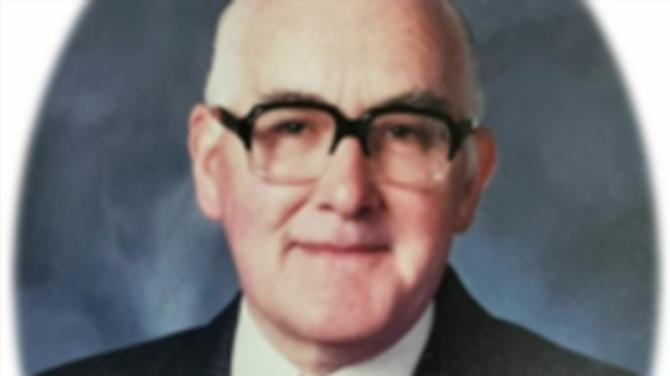 A private service of Thanksgiving was held at Clanabogan Parish Church at the weekend to mark the passing of 91 year-old Wilfred Breen, who was well known in the local area and beyond as a former teacher, district councillor, organist and letter writer.

Mr Breen passed away peacefully on August 13 at the South West Acute Hospital, Enniskillen. He was a beloved husband of Ruby and a much loved brother of the late Johnston and Vera.

Throughout his prolific life, Mr Breen taught at the former Duke of Westminster School in Kesh, was heavily involved in church life at Clanabogan Parish Church, served as a UUP councillor, and was well-known for his countless letters to various media outlets across Northern Ireland, including the Tyrone Constitution.

The funeral service, which was private due to current government social distancing regulations, was conducted by Canon Robert Clarke, Rector of Edenderry and Clanabogan Parish Churches.

Canon Clarke described Mr Breen as a "gifted man" who gave "100 percent in everything he undertook".

Canon Clarke said: "From the earliest years, Wilfred was taken to church on a regular basis, and this is something that he maintained until the recent lockdown. In all my 30 plus years as Rector here, the number of times Wilfred was absent here from worship could be counted on two hands.

"He loved this church. It was his second home. Not only did he worship here, he played his mighty part in so many different ways in so many varied positions here, and also within the Diocese of Derry and Raphoe."

Mr Breen was born on January 14, 1930, to Fred (Freddie) and Sarah Breen, of Denamona. They first had a son, Johnston, a former parishioner; their second child was a daughter, the late Vera, and eight years later, came Wilfred.

He was a pupil of Cranny Primary School, before progressing to Omagh Academy. On leaving he went to Magee, and then moved to Trinity College, Dublin where he concluded his studies.

Mr Breen became a secondary school teacher teaching varied subjects as History, Music and Religious Education. He taught in Coleraine, Fivemiletown and latterly, the Duke of Westminster School in Kesh.

He later sat as a local councillor for the Ulster Unionist Party, and was council chairman for a period. He served as Chaplain of Omagh District LOL No 11, and throughout his life was a member of Blacksessiagh Lodge. He was a founding member of both Blacksessiagh Junior Lodge and the present Blacksessiagh Band.

According to Canon Clarke, Mr Breen led a multifarious life and was "fully dedicated" to all he undertook.

"He was gifted with a very sharp, retentive brain and his capacity of recall and recollection was second to none," Canon Clarke said. "In all that he undertook, he gave his 100 percent. There were no half measures. He was fully dedicated.

"He didn't parade his intelligence or his Xian faith in a proud or flaunting manner. He was very much self-effacing. He was absolutely honest to the point of bluntness, and he certainly did not suffer fools gladly."

Throughout his life, Mr Breen was a letter keen writer, and he sent regular correspondence to this newspaper as well as other local titles, including the Belfast Telegraph, the Newsletter and Church of Ireland Gazette.

Of this element of Mr Breen's life, Canon Clarke said: "Wilfred had strong feelings and views about many things, particularly about matters politic and religious.

"He shared in writing what he firmly believed and did so in a skillful and eloquent manner. He was a prolific letter writer, so much so that his name was well-known throughout the 32 counties of this island.

"The Late Canon Victor Wakely, one time rector of St Columba's Parish Church in Omagh, was once very wittingly quoted, referring to our dear friend - 'Wilfred Breen is not only a pillar of the church, but also a column in the Con!'"

Canon Clarke said that Mr Breen was a "wearer of many hats" when it came to his involvement in Clanabogan Parish Church, and the wider Diocese.

"Wilfred had endless energy and his mind was ever active," Canon Clarke continued. "When it came to Canabogan Parish Church, he was a wearer of many hats and clerical robes.

"In the Diocese of Derry and Raphoe he had the honour of being commissioned as one of the very first ever Diocesan lay readers. This meant he could lead worship and preach in all the Church of Ireland Churches in the Diocese, something which he undertook with the utmost dedication.

"He led services in this church and when he wasn't up front as a reader, he was seated in his beloved Organ where for over 50 years he was organist and choirmaster.

"Wilfred was instrumental in the grand old Organ, built in this church originally in 1863, and he had it fully refurbished in memory of his late mother Sarah.

"He took comfortably to training the choir, and he constantly brought the best out of his organ each time he played it all over these many years. It was evident that this making of music was in itself a means of worship, which he delighted in offering to God and his church. He wasn't afraid to challenge both himself and the choir members to difficult pieces, which were practiced and sung to perfection."

Canon Clarke continued: "Let us forever be mindful of, and grateful to Wilfred's many other duties in this church over many years. He taught in our Sunday school and retired having been Sunday School superintendent.

"He hosted, along with Ruby, many Bible studies in their home, this done with much warmth and hospitality. For years he served on the select vestry and for a large section of this he acted as Honorary Secretary. You can imagine how excellent an instrument Wilfred has been for the work of the Lord in this church and beyond an how greatly he will be missed by myself and us all.

"How great must be the loss for his wife Ruby. As a couple, they were devoted to one another. Ruby is extremely grateful to those who have been with her and assisting her in the sacrificial ways that they have been doing so.

"She is also very thankful to the staff of ward Enniskillen Hospital whom she said were extremely supportive not only to Wilfred but also to herself which she greatly appreciates."