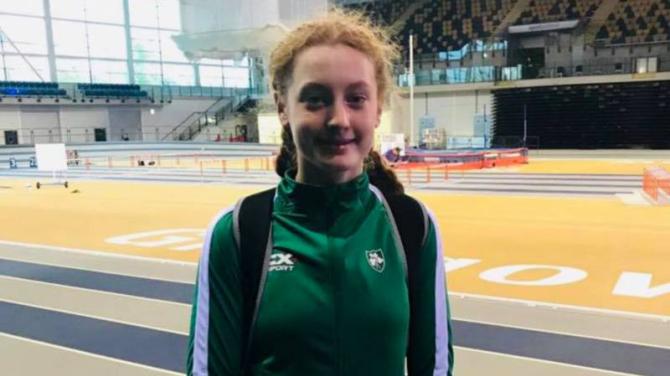 IT was a weekend to remember for three hugely-talented local athletes on the international stage.

Meanwhile, twin sisters, Eilish Flanagan and Roisin Flanagan - who hail from Rouskey but are currently enjoying a scholarship at Adams State University in Colorado, USA - helped their team to victory in the Rocky Mountain Athletic Conference Cross-Country Championships.

But closer to home,  Molly, 14, was a successful member of the Irish School team who competed against other talented teenagers from England, Scotland and Wales at the famous Emirates Arena in Glasgow.

Molly secured a stunning personal best in the 3kg Shot of 10.66m - the fourth longest shot of the Junior Girls’ competition - on her way to a total of 3,024 points.  This helped her Ireland team of Laura Frawley, Katie Noike and Niamh Moohan to third place in the team competition.

This was Molly's first venture into the international athletics scene and hopes it to be the first of many in the years to come.

It caps a remarkable year for the Ballygawley youngster. In August she performed admirably to win gold and retain her NI and Ulster U15 Pentathlon title at the Mary Peters Track, and two weeks later retained her Ulster Schools’ Pentathlon title at the Antrim Forum. This was despite suffering an injury earlier in the year which meant she missed most of the track and field season.

Meanwhile, some 4,000 miles away, the Flanagan twins - who are former pupils of Sacred Heart College, Omagh - were starring at the Rocky Mountain Athletic Conference Cross-Country Championships.

Eilish was the team's top finisher, but she had tremendous help from her sister Roisin , and their top-four finishes proved to be the difference maker in the final team score.

Eilish  was fifth at the 2K mark of their race and managed to become the race leader at the 6K split, but ultimately settled for the second place finish in a time of 21:37 flat.

Roisin placed fourth in a time of 21:46.7 and she maintained a top-four spot throughout the race splits.

Both girls, now 21, left their native Rouskey in 2015 having enjoyed success at both Ulster and Irish level. They are now ranked among the top women in the United States for cross-country.

They are also members of Carmen AC, and are hoping to gain selection for the Irish team in the European Cross-Country Championships.