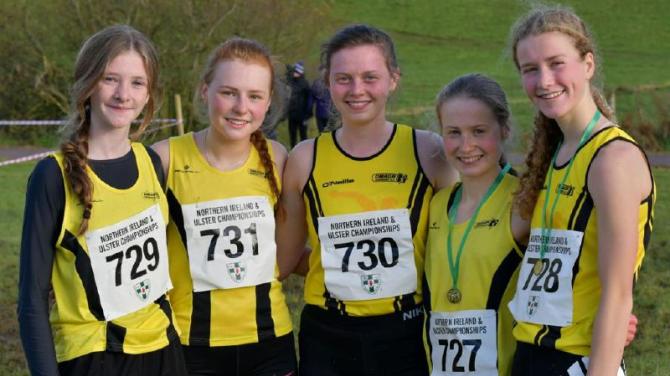 IT was a great day for Omagh Harriers at the NI and Ulster Club Cross-Country Championships in Scotstown, Co. Monaghan, on Sunday, with the U19 boys again qualifying through to the All Ireland’s.

The club’s other Ulster qualifiers were Niamh Heaney and Caelainn McQuaid in the under-19 ladies event and Sorcha Mullan and Ella Quinn in the U17 ladies ably supported by Ellie-Jane Quinn.

The U15 girls were represented by Lauren Molloy and Alana Casey who both ran strongly while the boys U15 team of Pierce Byrne, Fionn Corry, Matthew Hempton and David Quinn came 5th team. Sean Hagan ran his usual strong race and was unfortunate to just miss out on a top 12 place for All-Ireland qualification in U13.

His teammates Rory Dolan, William McCausland and Daragh Daly all packed well and finished in good position as did Mairead Corrigan in a huge field of U13 girls. In the U11 races, Omagh had many runners making their first appearance for club at cross country and Edward Cunningham, Lorcan Meenagh, Lucy McCullagh and Aimee McCloskey all performed brilliantly in the tough conditions.

The juniors with their coaches and parents had a great day out in Scotstown with near perfect weather conditions and are looking forward to the next event which for many of them are the All-Irelands in a few weeks’ time.

The senior ladies were also well represented at Scotstown and finished 6th out of a strong field of 14 teams from all over Ulster. In what were tough underfoot conditions with the juniors having run earlier Hayley Ballard battled well to finish 13th overall and first home for the Omagh ladies.

Ciara Largey swapping the hills for the soft ground had a great run in her first ever cross country as did Lucy McDermott and Sarah McElroy fresh from Drumragh 10K and Tollymore Half Marathon respectively the day before. Patricia Campbell, not so fresh from the the Drumquin GAA gala dinner the night before, ran well followed closely by Aileen McCann finishing strongly.

Nuala Grogan who also ran Tollymore battled bravely around the 4K course to complete the scoring for Omagh and finish a memorable day all round for Omagh Harriers.