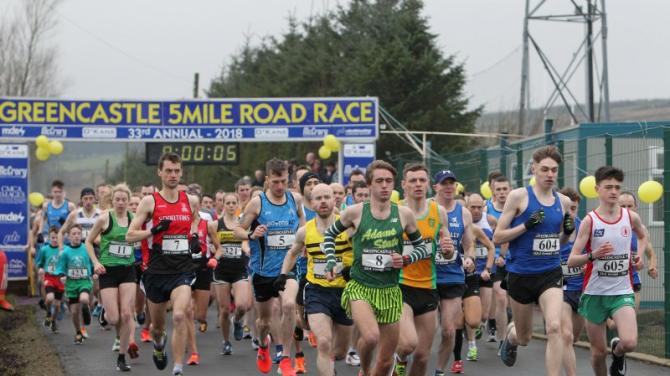 RUNNERS from the length and breadth of Ireland and even further afield took to the start line of the annual Boxing Day showpiece in the athletics, the Greencastle Five Mile, with North Belfast Harrier, Mark McKinstry, and Nike athlete, Emma Mitchell, taking the men’s and women’s titles respectively on the day.

There were ideal weather conditions – far removed from the wintry scenes which faced runners on previous race days – as over 1,500 runners showed their pace on the testing course including some challenging climbs.

The brainchild of Oliver McCullagh, from Greencastle, the race organiser was delighted once again with the response, compensating all his efforts and those of his helpers in putting the event together in its 33rd year.

From little acorns do mighty oaks grow and that very much sums up the growth of this well-supported event over the years.

Participants this year included Paddy Robb, who flew in from the United States, but it was Masters’ champion McKinstry who proved to be the man to beat.

There was no stopping NI record-holder Mitchell in the women’s race, despite the Banbridge only making her return after almost three months sidelined with a back problem.

Photographs in this week's Tyrone Constitution...