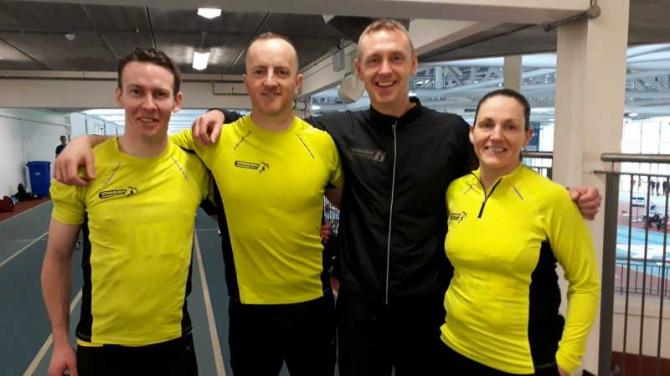 SATURDAY was a record-breaking day for Omagh Harriers member, Trevor McGlynn, who set a new Irish record in the 60m hurdles at the All Ireland Final Pentathlon Championships in Athlone.

Continuing his form from last year Trevor had a tremendous day and won Gold in men’s over 40 category setting a new Irish Record in the 60m Hurdles in the process.

Trevor went on to win four events outright and finished second in 1000m.

This accumulated enough points for the gold and put Trevor second on the Irish all-time list.

Mark McConnell was competing in his first Pentathlon, winning Gold in men’s over 35 category. He also had personal bests in the 60m hurdles and shot put.

Another debutant to the Pentahlon was Orlagh Colton.

She had a debut to remember and finished fourth overall in her first ever pentathlon and excelled winning the sprint hurdles.

She is now looking forward to the All Ireland's in March. Orlagh had to compete in the over 40 Category as AAI did not hold over 45 category this year making her finish even stronger.

Mark McBrearty finished fourth in the senior men’s category against a top field of Irish internationals capping his performance winning the 1000m outright.