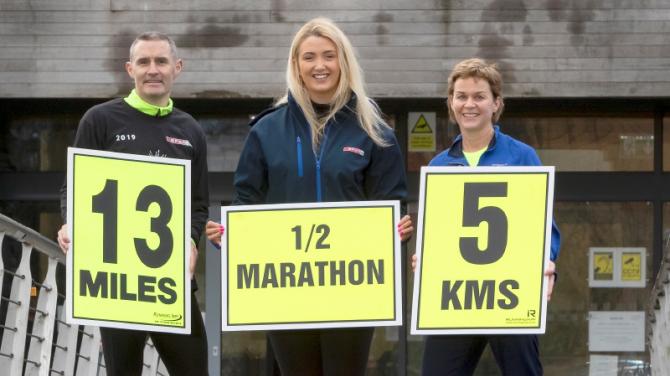 Organisers of the SPAR Omagh Half Marathon are expecting a record turnout in 2019, as the popular race marks its 30th anniversary.

Launched with representatives from title sponsor, SPAR, organisers are gearing up for a record-breaking year as more than 4,000 people are expected to take part in the Half Marathon and the Fun Run.

To add momentum to the landmark year, it is hoped a high profile runner will lead the thousands of walkers, joggers and runners as they take to the streets of Omagh and the surrounding area on Saturday, April 6.

To secure your place, all runners are asked to pre-register for the event online at sientries.co.uk before Tuesday, April 2. The small registration fee includes technical tops for all competitors, medals for finishers, chip timings, official race pacers for the duration of the course and post-race refreshments provided by title sponsor SPAR.

The Omagh Half Martahon has always been a great family day out and the 30th anniversary event promises to deliver even more fun. There will be live music and entertainment throughout the town during the race, with local residents encouraged to come out and support all of the competitors. SPAR will also be handing out spot prizes and running competitions on the day.

Race director, Michael Ward, said although there was still three months to go, preparations for the race were well underway.

“As the SPAR Omagh half approaches, we are already working hard to ensure we deliver the best possible course for the thousands of runners who will descend on Omagh in just three months’ time.

“When we started 30 years ago, we had no idea this race would grow to become one of the fastest half marathons in the country with many runners making a special effort to participate in Omagh in the hope of shaving a few seconds off their coveted PBs! I’d like to thank our title sponsor SPAR for investing so heavily in the event and making it the fantastic event we have today.

“Of course the Omagh half isn’t just for competitive runners”, Michael continued. “Our fun run has become very popular over the last few years and I’d encourage anyone resolving to get fit in the New Year to set themselves a target of running 5K in the fun run. Not only will you see huge benefits to your physical and mental health, it’s a fantastic social opportunity with many friendships formed within the local running clubs.”

Bronagh Luke, head of corporate marketing at the Henderson Group, owners of the SPAR brand in Northern Ireland confirmed that SPAR was thrilled to be back on board as title sponsor for the 30th anniversary event.

“The SPAR Omagh Half is now one of the key events in our calendar and we’re proud to play a role in delivering this great event. SPAR is passionate about promoting health and fitness initiatives throughout Northern Ireland and eager to support such events however we can.

“I would encourage as many people as possible to compete in either the race or the fun run and take the opportunity to raise some money for all the brilliant charitable causes that the Omagh half supports.

Even if you can’t participate, the SPAR Omagh half is a great family day out and we’re looking forward to being in Omagh on the day, encouraging all of the runners and handing out some great prizes.”

For more information about the SPAR Omagh half, visit https://www.facebook.com/OmaghHalfMarathon or contact organiser, Martin McLaughlin, on 07786164431.