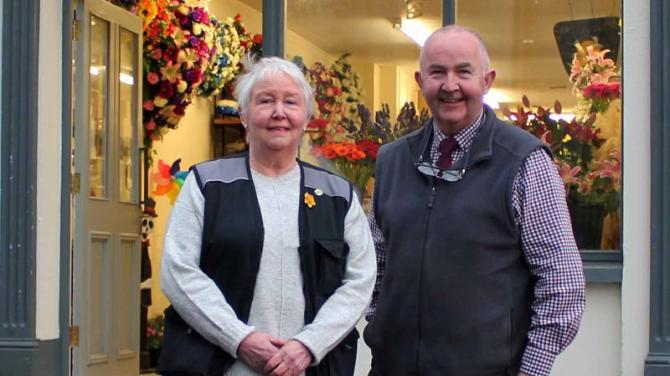 Siblings who have run a popular florists shop in Omagh for many years announced this week they will retire from business at the end of the month.

On October 31, John and Michele Rafferty, proprietors of Dobbins, will hang up their florists’ pruners ‘once and floral’ following generations of business on George Street Omagh.

First opening for business in 1945 as a grocery shop before transitioning into a one-stop flower outlet, Dobbins Omagh has proved a stalwart local business for two generations.

Speaking on his imminent retirement, John reflected on a prolific career spent supplying bouquets and flower displays of all shapes and sizes.

“This shop has been a way of life and something myself and sister Michele have always been a part of,” he explained. “We were born into it and we are proud to have been part of such an established business.

In the early days of the business as a grocery supplier, John says the shop was a well-known purveyor of all manner of unusal goods – and even can be credited with bringing the avacado to Omagh.

“My father first brought avocados in Omagh after the war ended,” he said. “As well as this, he also brought Pitta bread to Northern Ireland. He was the first for many fancy and experimental goods.”

As the decades progressed the business gradually transitioned to focus mainly on flowers, which John says helped them perfect the art of floristry.

“I feel 100 percent attention is needed in floristry,” he explained. “It is a tricky game and not something you can take and leave. There are many levels involved, including buying right, getting the correct conditions and working with suppliers. It is very specialist.

“I like to feel we have provided a great service to the community throughout the years. One experienced wholesale florist said we are the longest established floristry business in Northern Ireland.”

With this, John says both he and Michele are looking forward to a well-earned retirement.

“We feel the time has come to close our doors and enjoy what we have worked for. Our family has had the privlidge of being of service to the entire community since November 1945, when our parents opened the business. We are very grateful for all the support that we have had over the years from friends, employees past and present, suppliers, loyal customers and the general public. Thank you to you all.”

‘Dobbins Omagh’ will close at the end of business on Wednesday October 31.