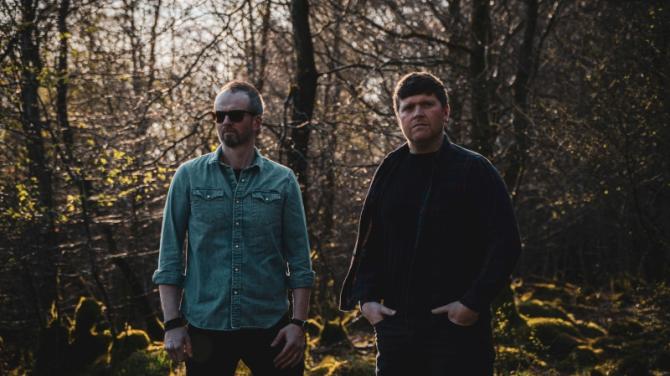 During this unprecedented time, most of us are spending more time indoors, watching more television, reading more books - and listening to more music.

But if your playlist has been exhausted and you are struggling for new music to enjoy, Omagh-based duo Niall Donnelly and Matt McGlinn have a treat in store for you.

Having worked together for over two decades, they decided 2020 was the year to fulfil their dream of producing an album. And after countless late nights and early morning sessions of writing and creating music, 'Wolfmoon' finally launched their long-awaited album, 'From the Mountain to the Wave'.

“Matt and I have been playing together in bands for 22 years,” explained Niall, who participated in the Voice UK back in 2018.

“At the age of 38, we hadn't anything written or recorded and we always dreamt that we would have, so we put our heads down and pulled together.

“It grew legs as soon as we started - it was really enjoyable and suddenly we had 12 songs created.”

With both men currently in full-time employment, with families of their own, it was a challenge to find the time needed to realise their dream. But where there is a will, there is a way.

“We had to fit it around our busy lives,” explained Niall. “I work 9am to 5pm every day and Matt teaches the guitar until 9pm, so I went around to Matt's house and we did most of the recording between the hours of 9.30pm to 2am! It took every minute of our time from last September - it was surprising just how long it takes to put an album together.

“It's funny how time flies when you are immersed in something. We were very particular about how we wanted the songs to come across.”

They started off with one rule: to write the songs that came into their heads.

“We didn't want to be restricted in any way and we ended up scrapping quite a few songs. We have been listening to music our whole lives and have a wide interest - from the relatively heavy stuff to country and laid-back music. I like listening to crazy new music that may sound crazy to other people, and I also like the older music, too.

“The songs grew a life of their own, so we started off with an idea and it evolved. We got others involved to do bits for us; Matt’s father-in-law did the harmonica in one of the tracks, and a good friend of ours, Eamon McElholm, who is a versatile musician, played the cello and piano in a couple of tracks. Gareth Lowry had access to a studio and did the drums for us.”

The result is twelve unique songs and an album that both men are extremely proud of. In fact, they have already started work on their second album!

“We just don’t want to stop now that we have got a rhythm going. Hopefully we can pick up a following so there is support for album two and perhaps even three. As long as we can enjoy it, that's the main thing.”

The name of their first album - From Mountain to the Wave - is an indication of where both men like to spend their spare time. It’s also a symbol of the laid-back nature of the music.

“I like to spend a lot of time at the Gortin Glens and I surf a bit too. Any weekend we get off we spend at the beach in Donegal.

“The album is easy listening. It is hard to put it into any one genre - it gets a bit ‘rocky’ in some places, it’s chilled in some places - but I think there’s something in there for everyone.”

From the Mountain to the Wave is now available on Spotify, iTune, Apple Music and YouTube.